Be the Wanderer Kaziranga National Park

Today began dark and early. We were up by 3:30am to leave by 4:45am and reach the Western Range – a 30minute drive from Hotel Iora, so we could catch the earliest safari at 5:15am. 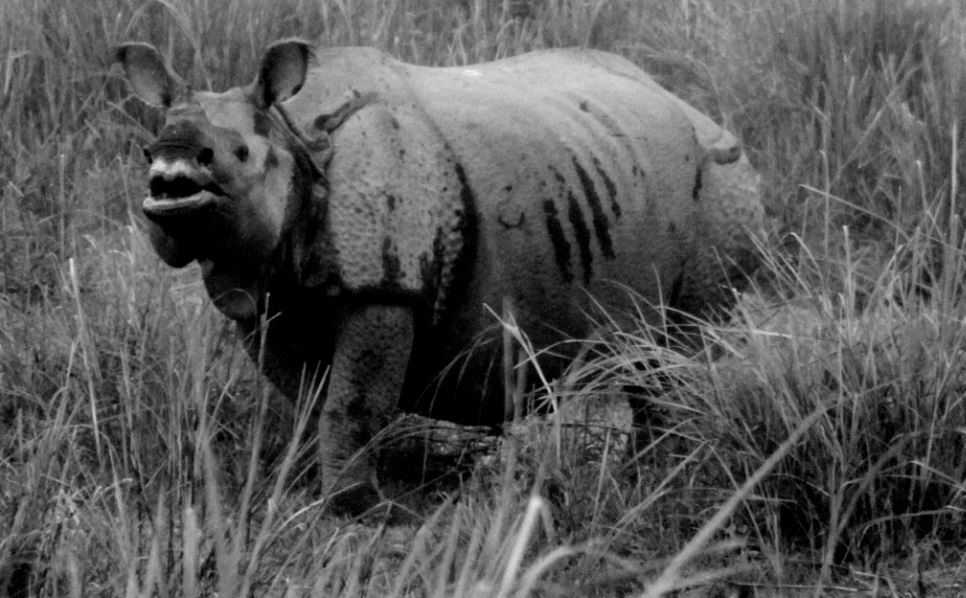 Kaziranga National Park has 3 entry points for safaris- the Western Range, Central Range and Eastern Range. Each of them falls in a different district. While animal sightings are the norm at the Western and Central ranges, the Eastern range is mostly visited by birding enthusiasts.

Elephant safaris start at 5:15am and last around 45minutes each and jeep safaris start at 7:00am and extend for around 2 hours each. The park is closed to tourists for about 1.5hours in the afternoon, so the forest rangers, mahouts and working animals can have their meals and some rest. It opens up again around 2:00pm until sunset which is 4:15pm these days. By 5:00 its pitch dark outside and you have to exit the park before it turns dark.

Each elephant seats upto 4 people on a howdah and they set off in groups of 8-12 elephants. 1-2 armed rangers escort the group. The mahouts all have their own lethal looking machettes. With these armed men to guide us and a thin iron rod to protect us from losing balance and toppling over we took off into the park.

The minute we entered the main area, we were surrounded by grass almost at eye level, even though we were atop elephants. This makes sightings more difficult. Kaziranga is only open from November to April. The rest of the year, the monsoons make it too treacherous to allow tourists in. The same holds true for all other sanctuaries in Assam. In November-December, the foliage is dense and the grass really high. By February the grass is burned in controlled fires, so the new grass shoots can come up before the monsoons start again. So February-March is the best time to visit for sightings.

Kaziranga is home to over 80% of the worlds one hormed rhino population and over 3 safaris today, we must have seen at least 7-10% of the rhinos in Kaziranga. It was heartening to see baby rhinos too, which meant the population was doing well inspite of poachers still trying to sneak in. In fact, today morning, a Naga poacher was caught in Kaziranga with a special Chinese made gun that kills rhinos with just one shot. Chinese are the largest buyers of illegally and brutally obtained rhino horns for traditional medicines.

After the elephant safari we came back for breakfast and then returned for two jeep safaris before and after lunch. We probably overkilled it, but I absolutely love seeing animals in the wild and it was definitely worth the early morning wake up and evening exhaustion. We saw wild elephants, rhinos, deer – swamp, hog, sambhar and barking, wild boars, bison, monitor lizard and plenty of birds. This more than made up for the disappointment at Nameri yesterday. Kaziranga also has a tiger population, but sightings are extremely rare. We weren’t fortunate to see one today and at least we weren’t subjected to the con of “pug marks” as practiced in Corbett 🙂

Most people say elephant safaris allow you to get closer to the wild animals. But given the height of grass right now and perhaps our luck, we were able to get closer to them while on the jeep safari. Also its very difficult to capture photographs while atop an elephant because they are constantly shuffling their feet even when stationary, so the swaying movement is perennial. 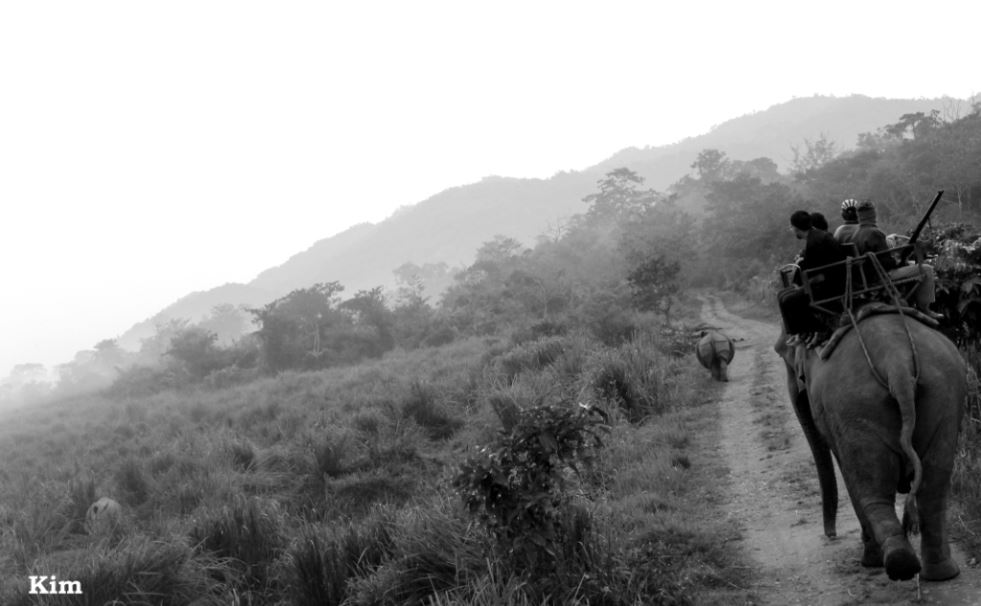 We have already decided that we will do our best to be back here in February-March to see what it looks like when the grass is burnt.

Another highlight of our day was the awesome Assamese lunch at Bhaatbaan – the ethnic cuisine restaurant at the Iora Hotel. We have tried Assamese cusine in Guwahati and quite enjoy it, but todays meal surpassed everything that we have eaten so far. Assamese food is very light and healthy. It focuses on fresh ingredients, simply prepared without much fuss. Mr Arun and
Mr Dulal Dutta the restaurant manager at Bhaatbaan were extremely helpful in explaining the technicalities and finer nuances to us. Their staff is efficient, polite and ever smiling.

The Veg thali is extremely filling and even for a hard core non vegetarian like me, I wouldn’t have minded if we hadn’t ordered a side dish of chicken in bamboo shoot curry. They have a speciality of meat steamed in bamboo hollows which takes longer to prepare, so for these dishes it is advisable to place your order and hour or so earlier. Other items are all served within 10-15 minutes.

We returned here for dinner and had a wonderful North East Chilli Vodka Cocktail specially created by MR Arun who is in charge of Food & Beverages at the resort. If anything can cure my horrid head cold, it would be this and I’m sorry I didn’t discover it earlier.

We head into interior Nagaland right upto the border with Burma over the next 3 days, so we don’t know whether we will be able to update our pictures, twitter or blogs. But we will have them ready to upload once we are back under network coverage.