My journey into Central Bhutan

We were at the ancient looking petrol pump in Wangdiphodrang town. Jigme, my friend and guide on the trip had gone to replenish his stock of Wills filters. I entered the ‘Black-necked Crane’ restaurant and ordered chicken ‘momos’ (kind of dumplings generally stuffed with pork) for breakfast. 10 minutes later I returned to the spotlessly clean main square.

The town, simply called ‘Wangdi’ (pronounced wongdi), is at an altitude of 4,430 ft and about 71 kms from Thimphu. I had spent the previous night at Punakha in a nondescript motel opposite the impressive Punakha Dzong on the confluence of the Mo Chu and Pho Chu rivers. The rivers met to form the picturesque Puna Tsang Chu River. In the morning, Jigme had collected me in a green Toyota pickup and we followed the river for about 45 minutes to reach Wangdi for fuel. It was 8.30 am on a crisp early November morning. There was not a speck of cloud in the sky. In the far horizon the dome shaped white peak of Mt. Jhomolhari was visible. Our destination was Bumthang in Central Bhutan, 200 kms away.

The central road over the Black Mountains… 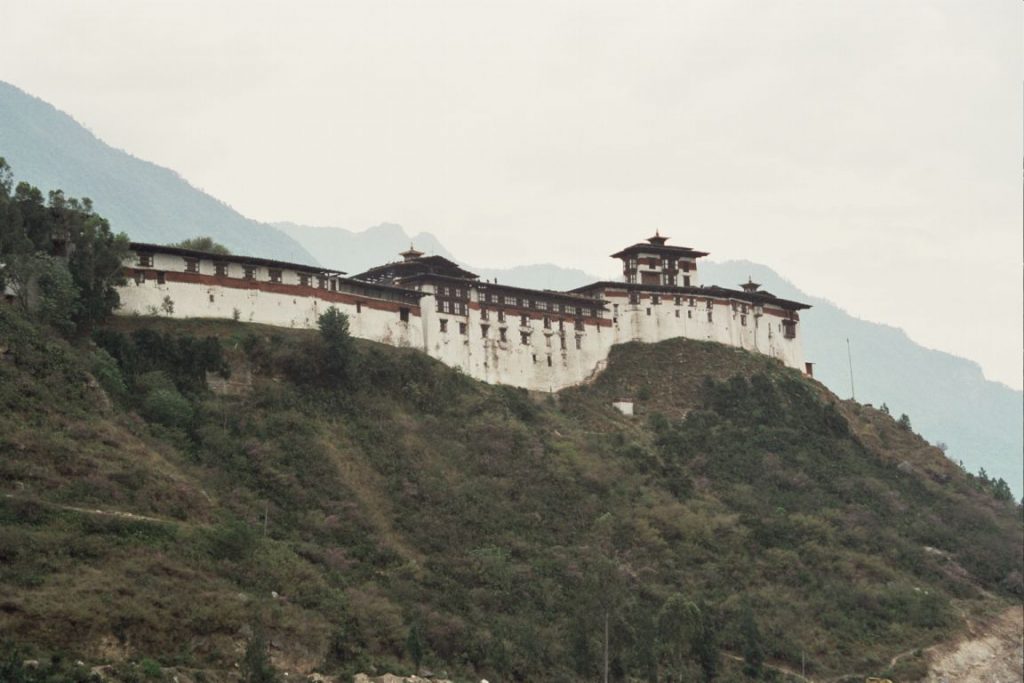 ” We are now entering wilderness country”, Jigme said soon after we left Wangdi. “There are no shops to buy anything till we reach Trongsa, 130 kms away.” I didn’t need anything as I had stocked my rucksack with all I would need for such an eventuality. The apples would serve me well till Trongsa and beyond.

The road snaked through the mountains as it followed the Dang Chu river which met the Puna Tsang Chu river at Wangdi just below the Dzong. A few kms from Wangdi, Jigme pointed out a prison in the valley below, flanking the river. It seemed out of place in such a serene and scenic location. The road climbed up steeply after the bridge at Tikke as we entered the Black Mountains. It is easy to understand why these mountains are thus called as one looks at the dark rock faces of the range in the distance. The area is sparsely inhabited and I could see farmhouses perched precariously on cliffs and hill tops. The jungles around here are dense and teeming with wild boar and Himalayan Black Bear. Only the previous week, ‘Kuensel’, the weekly newspaper had reported that a farmer was badly mauled by a bear near Nobding, a small village we crossed soon after. 7 kms beyond Nobding a road branched to the right. This road goes through a forest to Phobjika Valley at 9,840ft, 13 kms away, where Gangtey Monastery is located. Phobjika is the home of the rare black necked crane, which migrates from the Central Asiatic plateau to escape the harsh winters.

We continued down the road to Trongsa. Soon after this bifurcation the climb to Pele La Pass, 14 kms away, began. Near the Pass, on the right I could see the snow clad peaks of the Himalayan Range with Mt.Jhomolhari at 23,685 ft clearly visible. Only a few days ago I had seen the dome shaped peak as the backdrop to the ruins of Drukyel Dzong in Paro. This Pass at 10,825 ft is marked by a large prayer flag. The hillside around is covered with high altitude dwarf bamboo, a favourite food of yaks. If you are lucky, you can spot the yak herders who come down with their herd to the Pass for the winters.

Two huge bull-yaks were grunting and fighting fiercely on a slope beside the road as they locked horns. Jigme and our driver warned me not to go too close as I photographed them enthusiastically. The other yaks were fidgeting nervously as the two bulls tore the ground apart. I inched closer. Suddenly, there was a lull in the fighting and one bull yak just looked at me. Some wise man once said ‘adversity introduces a man to himself’. I turned and ran down the slope, past a bewildered Jigme, to the pickup!

On the other side of the Pass, the slopes were full of yaks feasting on the bamboo shoots. The young calves pranced nervously around their mothers. Even in Yumthang Valley in North Sikkim, I had not seen so many yaks in one place. This Pass marks the boundary between Central and Eastern Bhutan.

We descended rapidly and after Nikkarchu the road entered Trongsa district. We soon came across the huge white washed Chendebji Chorten next to the river. We halted here for packed lunch. Taking my camera, I walked down to the gurgling river. This is a fantastic place to spend a few quiet hours. There was not a soul in sight and the beauty of the place was overwhelming. I sat on a rock beside the river, munching my apples and watching a bird flirting with the water. This 18th century Chorten is Nepalese in style with eyes painted at the four cardinal points.

From Chendebji to Trongsa, the distance is 42 kms. The valley narrowed and the Mangde Chu river became a silver streak flowing hundreds of feet below the road. Jigme puffed his cigarette and announced, “For the next 20-25 kms, this gorge will remain deep and narrow. Vehicles that have fallen here have tumbled straight down to the valley floor below as it’s a sheer drop and there is nothing to stop the fall.” Seeing my nervousness, he said reassuringly, “Don’t worry, I’m sure one never feels a thing.” He also enlightened me that the Trongsa region is infested with snakes during the monsoons!

20 kms from Trongsa, we got our first enchanting view of the Trongsa Dzong clinging desperately to the cliff side across the gorge. The small township of Trongsa is scattered along the slopes. It took us an hour more to reach Trongsa. Bumthang was 68 kms away. It was 2 p.m. After an hour’s halt, we proceeded ahead.

The road went between the Dzong and the Ta Dzong (or the watchtower) and climbed sharply again. 29 kms from Trongsa, we reached Yotong La Pass (Yotola) at 11,155 ft. There was a sharp drop in temperature and we halted briefly to refresh ourselves. Then began the descent to Chumey Valley, the first of Bumthang’s four valleys- Chumey, Choekhor, Tang and Ura.

I had heard about the exotic valley of Bumthang and it’s early November festival from the locals when I first stepped into Bhutan after holidaying for 10 days in Sikkim. I had heard that it is an enchanting place not frequented by Indians because of it’s remoteness. So, when Jigme and his colleagues processed my papers and arranged for my trip to Bumthang in a pickup van that was carrying luggage for some foreign tourists, the last doubts related to lack of finance began dissipating. Finally, the wandering bug in me took over and I decided to venture into a region where few Indian tourists go…

The road went through a wide and immensely beautiful valley. The farmers were returning from their day’s work and laughed and waved at us. An enchanting stream escorted us for a few kms till we reached Jakar, the main township in Bumthang and the seat of administration.

Because of the four-day festival at Jampa Lhakhang, foreigners occupied all the few good lodges in the valley. I didn’t see a single Indian tourist in Bumthang during my stay there. I checked into a room above a provision store paying 110 Ngultrums a night (equivalent to the Indian rupee). It was the only motel in town and my home for the next three nights as I discovered paradise on earth. That night in sub-zero temperatures, I slept in a room that was damp and cold and dug deep into my sleeping bag for warmth. Bumthang valley, like Paro valley, is an enchanting valley that is sparsely populated, with the shallow, emerald green Bumthang river going right through it.

I began walking the next morning at 9 a.m. after the fog cleared. Jakar town comprises of 25 wooden lodges on either side of the main street. Like everywhere else in Bhutan, the only vehicles around were the ubiquitous Toyota. Within 5 minutes, I was at the edge of town and walking along the riverside. Soon I came across a mechanical workshop and asked for directions to a shop selling the famous Bumthang cheese and apple juice. After gorging myself on the delicious cheese and gulping down 2 bottles of apple juice, I was told by the friendly landlady to check out the experimental Swiss farm atop Karsumpey Plateau, 20 minutes walk up from the shop.

I climbed up the gently sloping road towards the plateau and saw an awesome sight. Grazing in a lovely sun swept meadow were 23 sturdy Swiss horses which, I learnt later, were brought from Switzerland for crossbreeding with the local Tibetan breeds. I continued down the road and came across the farmhouse, and walked through an apple orchard. It was then that I first heard the overpowering melody of someone playing on the Dranyen, a 7-stringed instrument shaped like the mandolin.

He sat on a rock at the edge of the plateau overlooking the fabulous Bumthang Valley and hummed away. His two small children were laughing and playing with him. For the next two hours, I lay on the ground beside him as he played his Dranyen. I hungrily devoured the magnificent sight before me and carved every minute detail of the valley in my mind. Over the next three days, I would walk alone in this valley, discovering monasteries and chortens, eating cheese and sleeping on a meadow beside the river. I would attend the opening ceremony of the 4-day festival at Jampa Lhakhang at midnight in sub-zero temperatures and watch the naked dance, visit the Jakar Dzong, the Kurjey Lhakhang, drink apple brandy, flirt with the landlady’s pretty daughter Kuengzang and play with the local children. I would see the processing of beer and cheese in a local factory, lunch with the remarkable Fritz Maurer, the old Swiss dairy technologist who had made Bhutan his home over the last 29 years.

But, for now I was content lying in an apple orchard, many miles from home, listening to a father singing Bhutanese folk songs for his children… 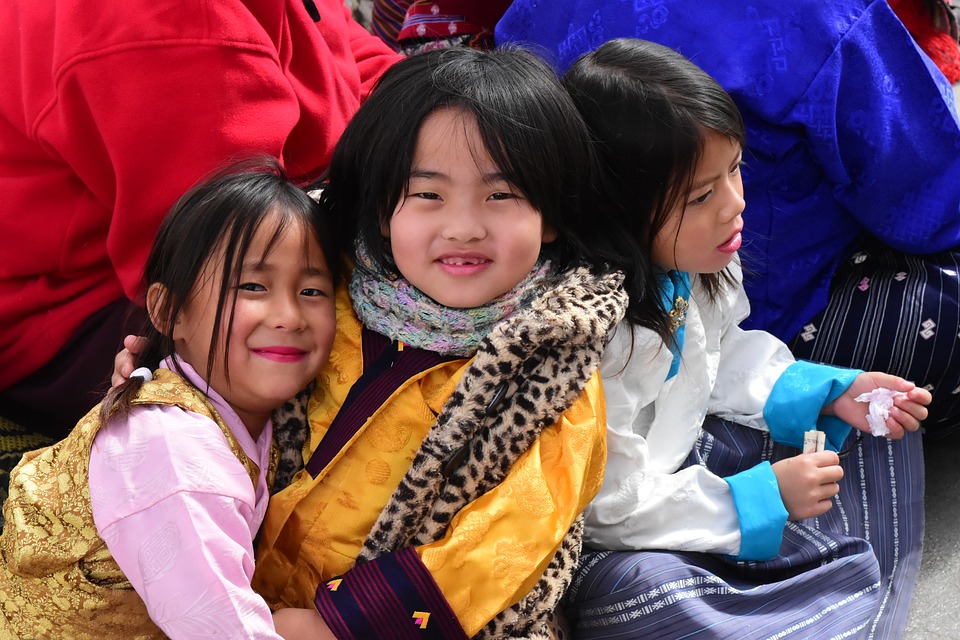 Check out our latest package to Bhutan