Flame And Fortune (Welcome to part 2) 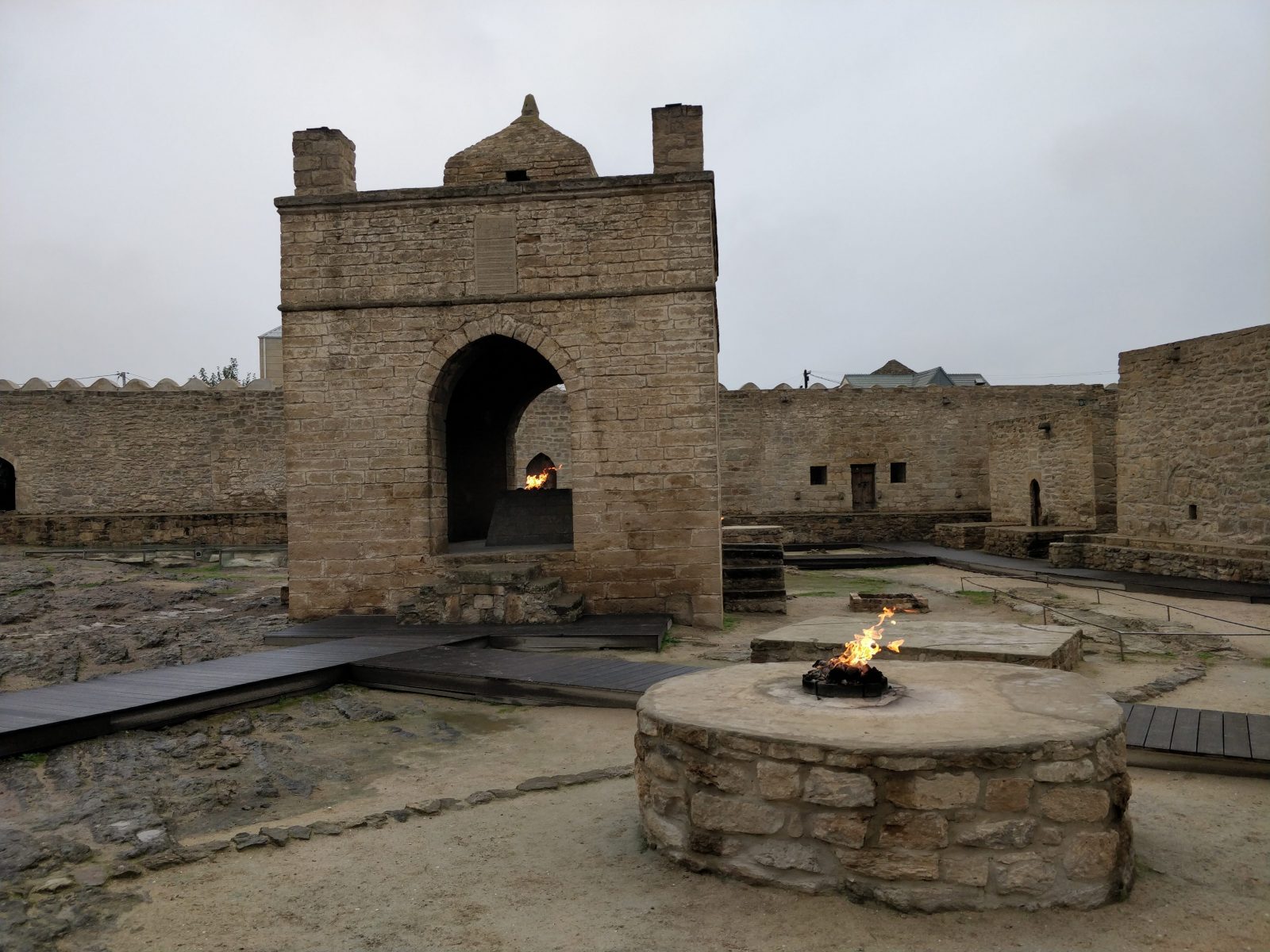 The strong Azerbaijan relationship with fire seems to have some mythological connections as well. According to Greek legend, the Caucasus (they called it Kaukasos) was considered one of the pillars supporting the world. It seems that Prometheus was chained here and his liver was eaten daily by an eagle – this was his punishment for sharing the secret of fire with human beings. Today, the region seems to be thriving on the legacy left behind by Prometheus.
Fire is worshipped across various religions and cultures, and the proof of that is a place called Ateshgah. Some distance away from Baku, Ateshgah – literally, the home of fire – was a place that attracted pilgrims from Zoroastrian, Hindu and Sikh religions because of its eternal fires. Owing to natural gas deposits, seven fires used to burn in this area. A structure built here sometime during the 17th-18th centuries formalized it as a place of worship with cells for monks. Today, a single fire burns in an altar at the centre of the courtyard. The source of natural gas was cut off by the Soviets drilling for gas. Today, the gas is piped in to keep the fire burning. Still, Ateshgah is a revelation as Sanskrit, Gurmukhi and Persian inscriptions are seen here – it’s a place to reflect upon to see how far our ancestors used to travel, for trade or spiritual purposes. 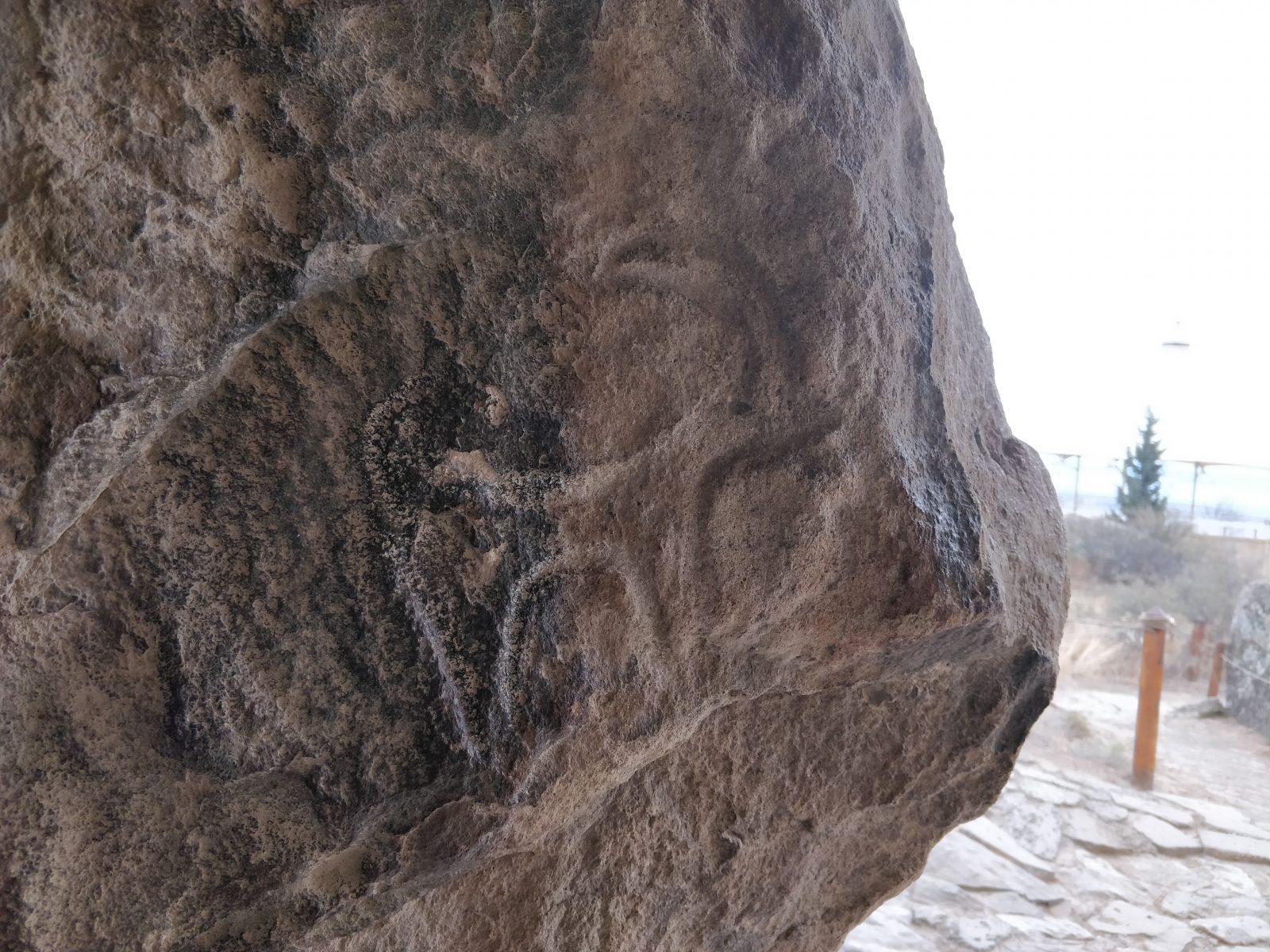 The Caucasus area, which falls between the Black Sea and the Caspian Sea, is occupied by countries like Armenia, Azerbaijan and Georgia, while parts of Iran, Russia and Turkey also come under it. The human history of this region goes back over 40,000 years – which can be seen in the area called Gobustan, about 70 km from Baku. Driven by Iman in a Mercedes-Benz Viano, we are on our way there, with Emin our guide talking about the petroglyphs we are about to see there. The rock formations and the petroglyphs are remarkable. As it happens with places that preserve ancient human settlements, it is an eerie spot – you’d get a similar feeling when you visit Bhimbetka in Madhya Pradesh to see the cave paintings. The Gobustan Preserve has over 6,000 rock carvings or petroglyphs, which show scenes from about 40,000 years – people hunting, dancing and fighting of course, as well as various animals and rituals. More “immediate” inscriptions are left behind by a Roman legion sometime around the 1st century AD who seemed to have passed by this place here. Slightly iffy weather meant we couldn’t drive beyond to see the mud volcanoes – where mud keeps oozing out from under the Earth, to give the place a dystopian vision of the future. 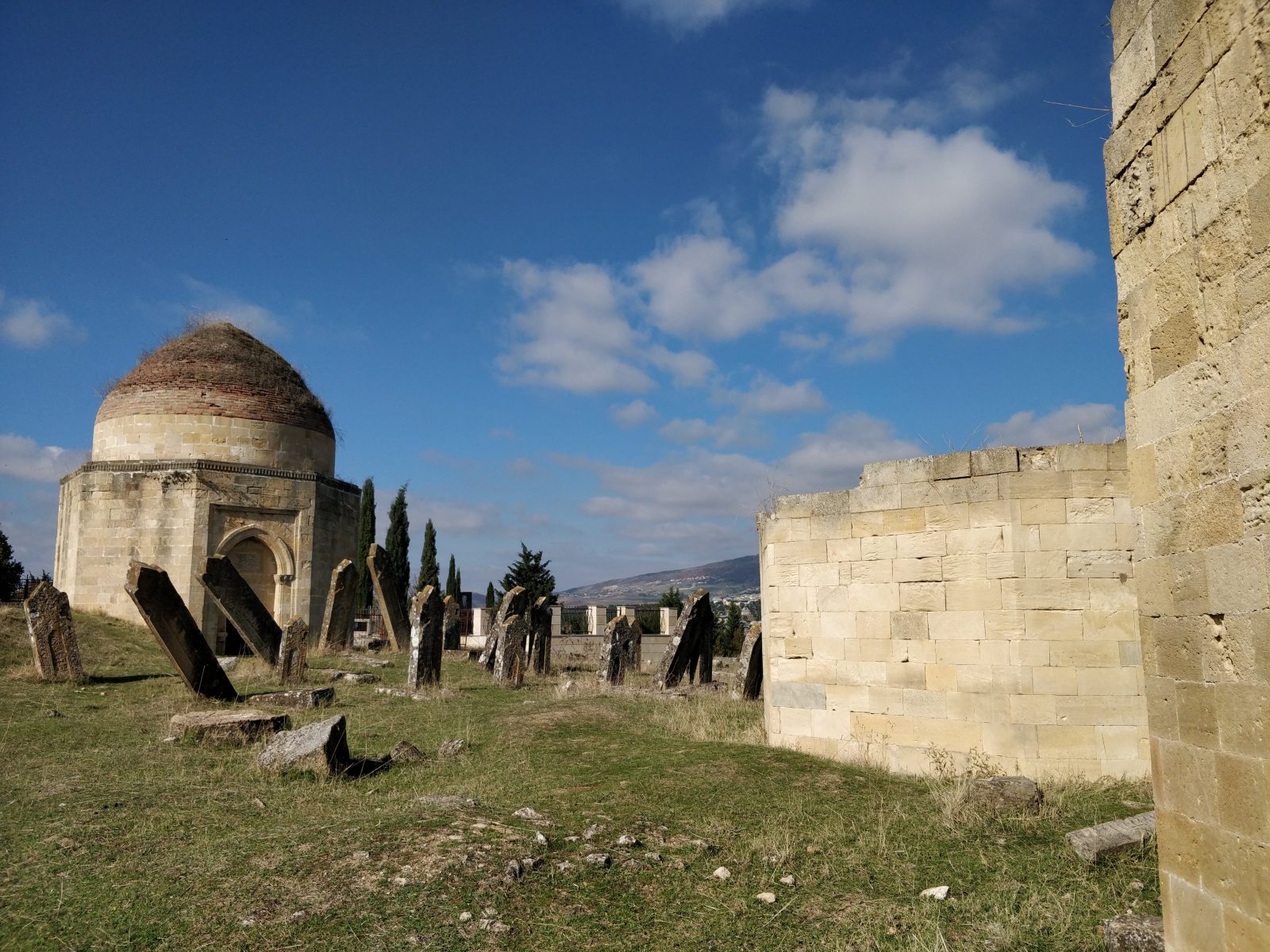 It is livelier at Shamakhi, the capital of the Shirvanshahs from the 9th century – about two hours away from Baku. Part of the Silk Road, Shamakhi has an imposing 8th-century mosque. It seems to also have had some sort of cultural and trade links with India and China. If you ever visit this place, don’t miss Yeddi Gumbaz, at the top of a hill overlooking the town. It is essentially a large cemetery, with only three mausoleums remaining with many others destroyed. Built around the 18th century, the place has parts of many mausoleums strewn all around, giving it a melancholic feel. The graves belonged to the family members of Mustafa Khan, the last khan of Shamakhi. I felt sad to leave this place, but we had more to see. We drove through the lovely Lower Caucasus mountains to reach the resort town of Gabala. It is a picturesque place built to enjoy the view of the mountains. The Tufandag Mountain Resort has a cable car ride which is a pleasant enough experience and we mostly had it to ourselves till a huge bus carrying a bunch of Pakistani tourists arrived. It felt like home. 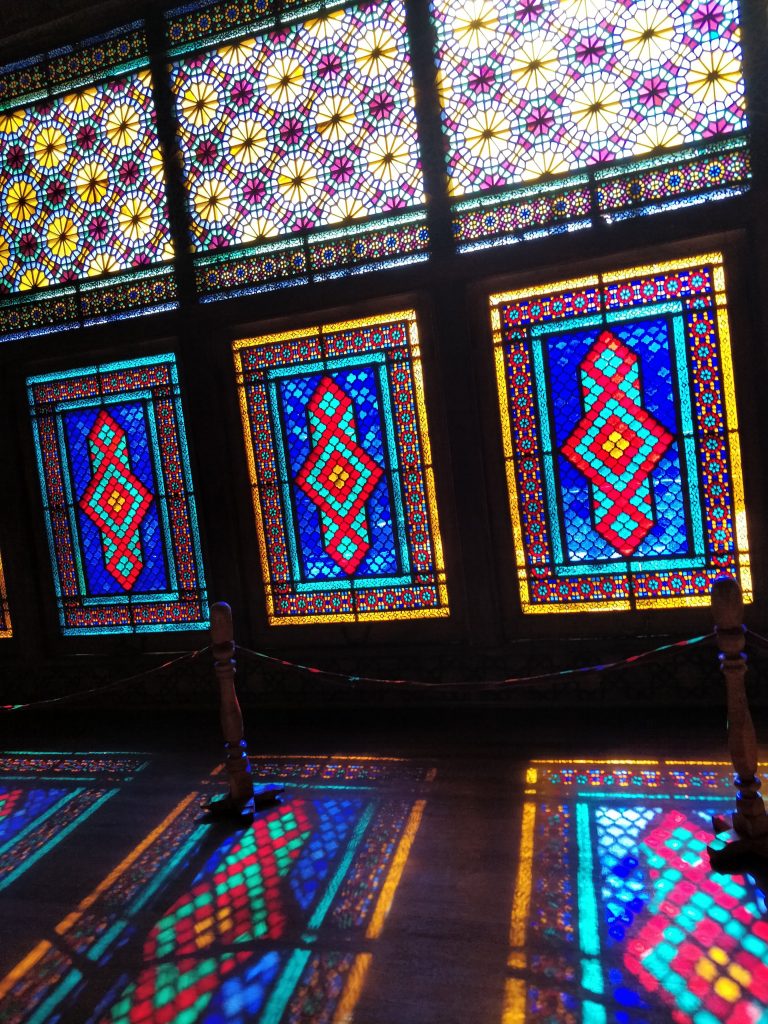 The Lower Caucasus are stunning – the landscape feels like the Himalayas, only a bit shrunken in size. The crystal clear rivers gurgle, smoothing out and rounding the pebbles further, the coniferous trees stand out against the slopes and the valleys give stunning views of the countryside. It is a great drive to Sheki – an ancient city of Azerbaijan and located on the slopes of the Caucasus. We drive to see the little Kish village, which has an ancient Albanian church built sometime around the 1st and 2nd centuries – considered the first church in the Caucasian region. We walk our way through the village, in time to see a vast procession of battered Russian-made Lada cars winding down the village road, blaring their horns and shattering the peace of the place. It is a wedding procession and we are fortunate to see the villagers celebrating it. The Kish church looks like a place where an Indiana Jones movie could have been shot – where you would expect to stumble upon ancient Christian reliquary or the skeletons of a monk or two hiding an enormous secret. Well, imagination apart, the Norwegian explorer Thor Heyerdahl at least thought there was something over here, so he has visited Kish and conducted research in this region. There’s even a bust of the famous adventurer and ethnographer close to the church. 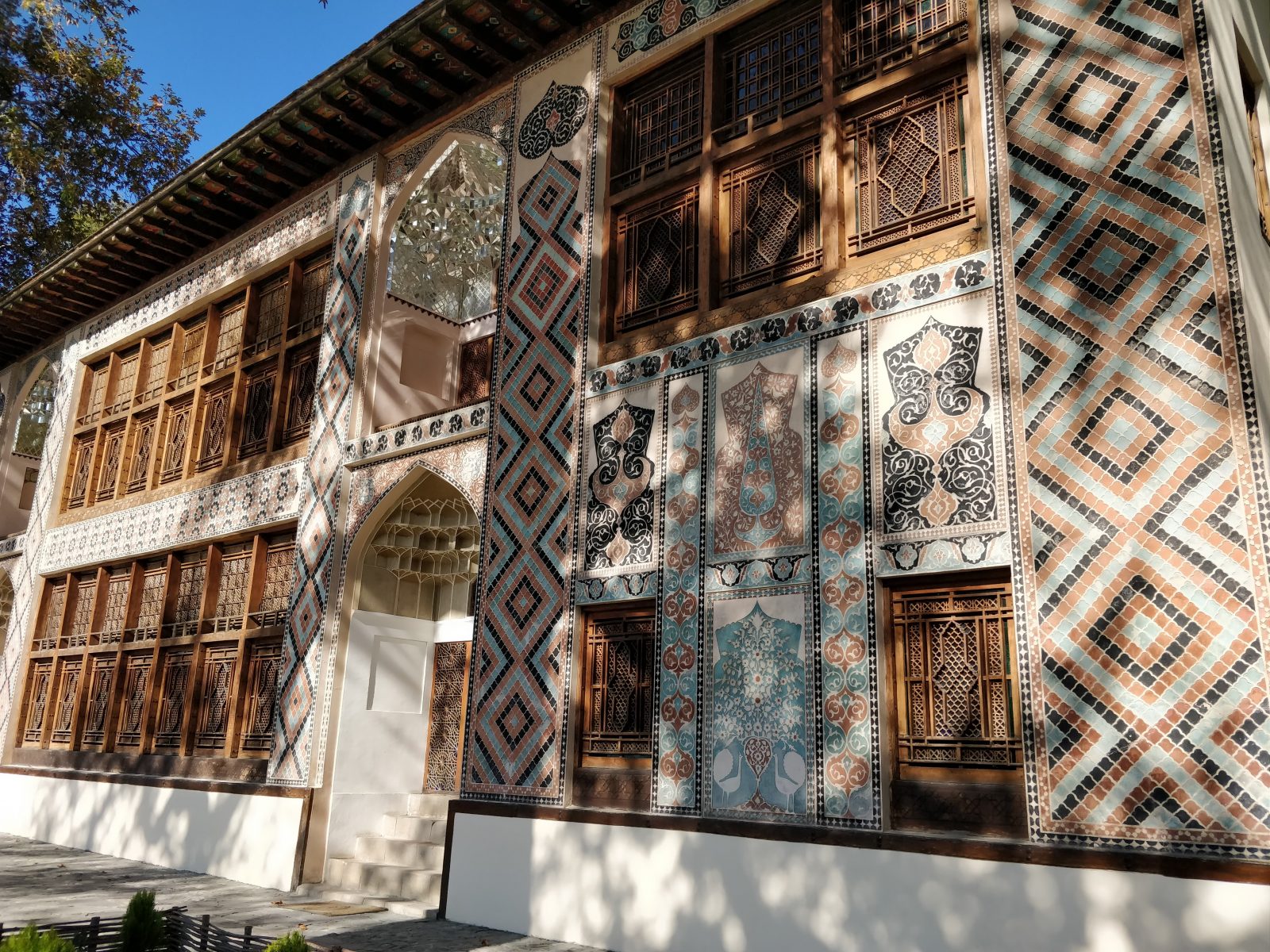 Sheki’s piece de resistance, however, is the palace of the Sheki Khans, a summer residence built-in 1797. Beautiful inside out, the palace is a great display of the stained glass-and-wood craftsmanship unique to the area called shabaka. Visitors are let inside only in batches so as not to crowd the place and it also allows you to dwell peacefully and take in the marvels of the architecture, the artistry and the dexterity of the craftsmen. Winter sunlight streams into the palace through colourful pieces of stained glass held up by glue-less and nail-less geometric patterns of hand-carved wood. The effect is simply exquisite. The wooden floor looks like a carpet of made of colourful pieces of light and the façade, windows and doors are lit up in elegant, harmonised patterns of colourful light. The art of shabaka or shebeke goes back to the 9th century, and master craftsmen deftly insert pieces of coloured glass into wooden lattice patterns made using walnut or oak wood and fitted tightly via grooves and notches, obviating the need of nails or glue.
We step out into the sunshine and look back at the summer palace – you can barely make out the dazzling effect of shebeke from outside. We walk into the warm sunshine into picturesque Sheki town. We pick up some souvenirs, take some pictures of a beautiful caravanserai converted into a hotel and buy some more local sweets for taking back home. The best part of Azerbaijan is that it’s not so expensive despite one manat working out to about forty rupees.
We rest our weary feet and take in the superb, celebratory open-air ambience of the curiously named Gagarin restaurant and watch the locals celebrating life and the cuisine along with their families. The next day, we would be flying back from Baku to Mumbai. In the meantime, the three of us silently wished that this wonderful trip to this beautiful country would never end.

If you’ve missed out on the first part then here’s a link to it!