Why should one visit the naga villages

Yesterday we were puzzled by the numbers on the 6 guest house bedroom doors. 17, 201, 134 etc. Completely illogical and non progressional. One theory we had was that Aunty had got the number tags at a discount and took them all. We were thinking of asking her about it, but were too tired to think straight. Today we realised that the keys to the doors came with pre assigned numbers and the corresponding key numbers became the door numbers.

For today, we hired a local Naga guide – Anyang. There are 16 Naga tribes and they each have a different language. They now use a language called Nagamese to communicate with each other and English. However, to smoothen the paths and ensure no misunderstandings in translation, we were assured that it would be best to have a local guide accompany us.

One of the 16 Naga tribes is the Konyak. Districts here are roughly divided along tribe lines and Konyak is also the name of this district. It is divided into Upper Konyak, Lower Konyak (borders Arunachal Pradesh and Assam) and Eastern Konyak (borders Burma). There are 4 main Konyak kings. They are blood brothers and each of them has some villages under them. Each set of villages is governed by a chief – Angh, who bears allegiance to one of the 4 kings. Similar structures are found in all the other Naga tribes.

Today we visited Shengachingyu and Longwa in Eastern Konyak and Chui in Lower Konyak. Paramount Guest House, where we are staying, is in Mon, which is part of Lower Konyak.

The drive to Shengachingyu which is 40 kms took 1.5 hours as the road is just a broad mountain goat path. Roads maintained by the BRO (Border Roads Organisation) and the Central Government are in much better shape than those managed by the State Government. 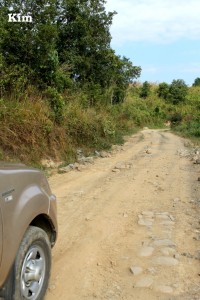 The foreigners who were staying in some of the other rooms at the at the Guest House had finished their village visits yesterday and were really excited about meeting with Naga Kings. So I guess I also built up the image of a fierce warrior chief. (Nat Geo programming simply reinforces these stereotypes.) When we arrived at the straw, thatch and reed mat palace, the chief had gone for a walk. He soon arrived and if he had not been introduced to us as the Chief, we would never have guessed. Dressed in a simple cotton animal print jacket, trousers and red flip flops, we could have easily passed by him anywhere in the world without giving him a second glance. 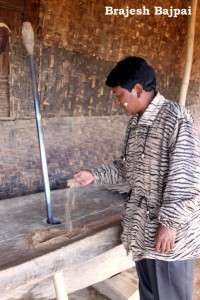 However, he is a very forward looking chief. One of the few chiefs who has only one wife. (Naga chiefs may marry as many times as they like) His son is currently studying at University in Shillong. He is building a brick and mortar structure to house a future museum and generally is concerned about the people who look to him as their chief. Konyak warriors were headhunters. A plaque near the palace, proudly proclaims that the father of the current chief beheaded 36 enemies & during his reign 130 were beheaded by the village warriors. His grandfather was a famed headhunter. So they currently have a collection of over 480 skulls which have been gathered as war trophies. He plans to display all of them properly when the new musuem is ready. 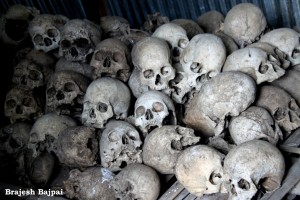 Making guns is a craft practiced in Nagaland and we visited their workshop. Wood is available in plenty in this thickly forested region. The barrels are made from all kinds of spare parts and they even make the bullets themselves. 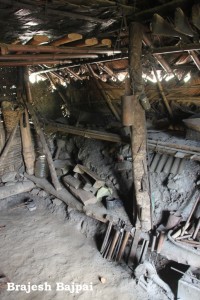 The next village that we visited was Lungwa. This chief greeted us in shorts and a cowboy hat, with just a Naga style necklace with 5 bronze heads as a pendant to mark who he was. This chief greeted us, posed for photos and promptly invited us into the inner room to watch him and his council prepare opium for smoking. 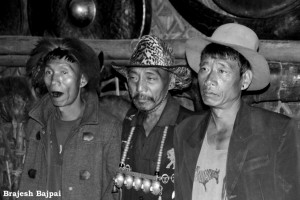 As the only woman in a room filled with about 20 Naga men and the 4 men I was travelling with (husband, driver, guide, Naga guide) it felt like I was trespassing. But since I was invited in, I was happy to sit in the background and watch. Men ranging in age from 14 to 80 sat around a fire while the opium was distilled from soaked bits of cotton and prepared for smoking. There was some chanting which we were later told was more for our benefit than of any significance. 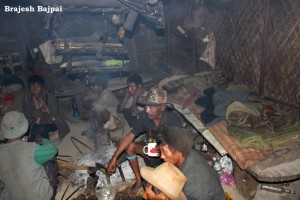 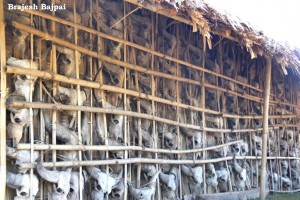 When we came out some of the villagers had spread out their wares for sale. This reminded us a bit of the Masai Village that we visited in Kenya. The jewelry on sale was not something “I” could wear, but I did pick up a couple of pieces that would look lovely on our walls. 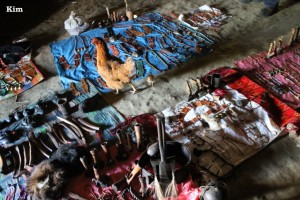 There are no restaurants where tourists can eat anything in Konyak except at the checkpoints. So we returned to Paramount Guest House for a late lunch. After which, Anyang took us to the village of Chui. We just strolled through this village and were followed by laughing, giggling children throughout. This particular village does not see a lot of tourist traffice, so the kids were curiously following us everywhere, alternating between making faces for the camera and running away from it. 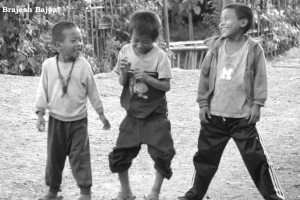 To a general description, these kids could be described as poor. But they are well fed (nutritiously) and happy. Their joyful smiles when playing with a ball made by tightly rolled up plastic bags or rolling down the hill on a makeshift wagon were way wider than any PS3 playing or firefox riding kid I have ever seen.