What Will The Future Of Travel Be Like ? (Winning Entries) 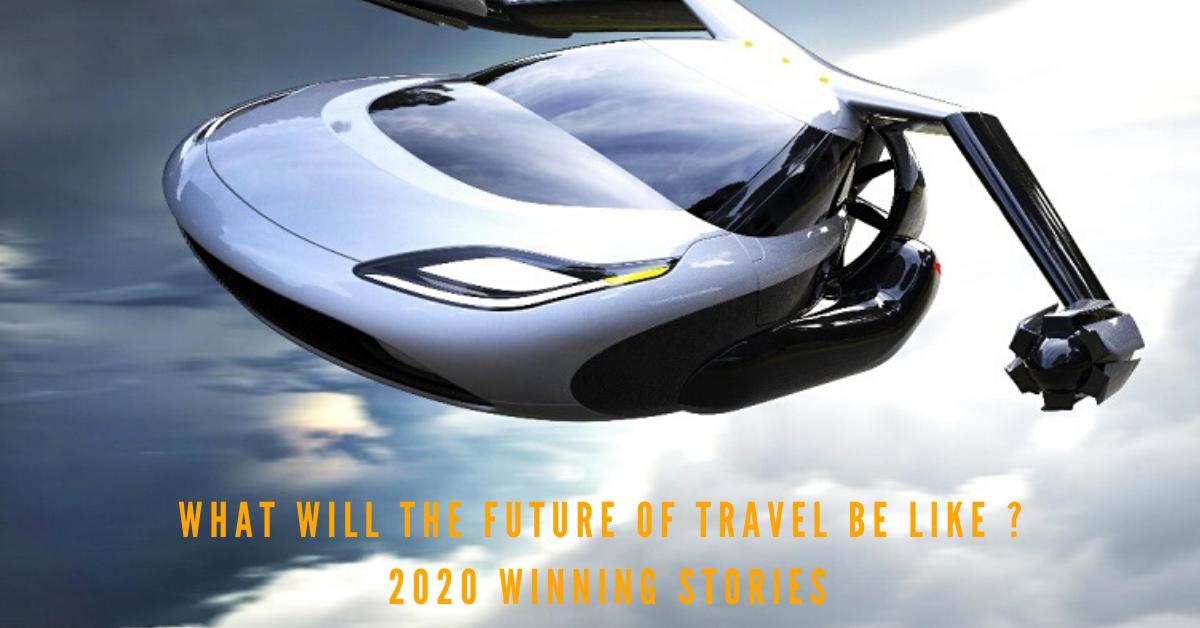 Congratulations Shaista and Aalam  -the winners of our story contest !!

Your stories were fantastic and futuristic and  had us packing our bags for an  out of this world holiday !!

A huge thank you to all our contestants , we really appreciate everyone writing in with such amazing super ideas!

It was the year 2070 and I rushed along towards the main transit terminal, with my two kids in tow. It was a much awaited vacation to Jupiter’s moon Europa and we did not want to miss the travel pod waiting there. For the kids the vacation had already begun. Their eyes rounded as we entered the vast terminal. Huge tulip shaped travel pods were docked in their pits. Each travel pod was made specifically for its destination; the celestial body it was travelling to. The one ferrying us to Europa had lots of thermal packing around it, making it one of the larger pods. Our flight was fully packed as Europa was one of the favorite destinations for the young brigade. At the entry vault our temperatures were taken and our vital signs checked. Any sign of illness and we would be sent back without refund; government regulations and lessons learnt from a pandemic that had raged across our planet nearly half a century ago.

Next we were supplied with thermally insulated suits and gravity belts and led to our sleep pods. All our comforts were attended to by our digital friends the Androbots. We would be put in a sleep like trance for the major part of the 628.3 million km journey to Europa. As we lifted off, the huge viewing bays afforded an amazing view of our home planet, and it seemed to recede as we travelled further until it was a pale blue dot on the horizon. The kids excitedly waved goodbye to mother Earth and looked expectantly towards outer space. Soon it was sleep time and all the passengers were escorted to their comfortable, cozy sleep pods and the trance mechanism abroad started its work and zzzzzzzzzzzzzzz.

A faint melodious uplifting music playing in our ears signaled the end of our journey as we woke up refreshed. The huge bay covers opened and lo and behold!!  We were afforded the amazing views of thegiant Jupiter as we passed it by. The great Red Spot was actually a huge swirling storm on its surface, several thousand kilometers across. The patterns on Jupiter’s surface kept shifting as we sailed by giving us an awesome show. My kids were so enthralled they would not leave the viewing bay; they  were having the time of their lives. After some time the lovely moon Europa, our destination came into view, beckoning us with it lovely green color and bands of cherry red. But the kids were waiting for the star attraction- the water plumes; and soon one came into view. It was a jet of water shooting out into the atmosphere hundreds of miles high and twinkling and sparkling like a fountain of diamonds. Our ship circled around it several times to give all abroad the best view and then it was onward to the landing station.

On landing our craft was surrounded by ice leaving everyone spellbound. With no ice left on earth, this was the reason for maximum tourist traffic to Europa. The Androbots requested us to put on our gravity belts and thermal suits and we were led to a huge enclosed and pressurized arena where we got to play with the water ice to our hearts content. Going outside was fatal for humans so there were a lots of activities and games and shows to keep us entertained. We stayed there for a week and ventured outside on adventure trips wearing protective suits to keep us safe. Our next stop was deep down below the ice crust of the moon- 50 kms to be exact!! We boarded the descalator which barreled down towards the ocean of Europa deep below. Our crazy journey ended with a splash into the warm waters of the hydrothermal vents on the ocean floor. The descalator docked with a huge sphere constructed on the marine rocks. It was our hotel!! How exciting!!

It was going to be our home for the remainder of our trip. We roamed about in our own water tight little shuttle and explored the ocean floor. The variety and numbers of exotic creatures inhabiting the Europa seas were beyond imagination. The tardigrades, the aquatic animals were all bioluminescent in the dark ocean depths. They put up a heck of a light show!!

All too soon it was time to return back to Mother Earth. But what an amazing trip!!!

Winner Aalam Sultanji’s story- Interstellar Travel : Where Do We Go ?

Transport has always been a very important part of any civilization. Humans have become the dominant species on our planet, and transport has allowed that. Yet, we are confined to this planet and are slowly running out of resources. It is time to look at the stars and ask ourselves, “Can we reach them?”

The year is 3012. Humans have populated the Red Planet, Mars. We genetically engineered plants to be able to perform photosynthesis on Mars, hence giving us oxygen to breathe. Artificial water bodies were constructed that applied technology to replicate the water molecules. This process gave us unlimited water. We built giant cities on the surface of the planet. What happened to Earth? It became a museum to how humans used to live.
I was born on Mars, 25 years ago. After specializing in I.T. (Interstellar Transport) in college, I was chosen to build a spaceship to travel to the other planets of the Solar System. Never had I been more excited. As soon as I got the task, I went to work. I started looking for fuels that can burn for a very long time and give out a lot of energy to produce thrust. First, I looked at primitive fuels like coal. Except, they were on short supply. Next, I looked at nuclear energy. It burned for a very long time and gave a tremendous amount of energy. The only problem was the waste produced after the fuel burned out. Then it struck me! The most powerful source of energy, the most important source of energy – the SUN!! I used solar energy in my calculations, factored in the fact that the further away the spacecraft got, the amount of solar energy would decrease. The result was ideal. So, I got to designing my spacecraft.

One month later, my spacecraft was ready! It was a magnificent spaceship shaped like an arrowhead. The cockpit was at the tip of the spaceship. The wings were covered with a light sensitive material that created an electrical charge in the presence of sunlight. This electrical charge was stored in twelve different batteries, each capable of powering the spacecraft for a hundred years. The battery provided the heating and pressure inside the cabins as well as powered the ignition chamber which provided the thrust for the spacecraft. The batteries also helped to provide light to plants that provided food for the entire journey. It had a top speed of two-thirds the speed of light, making it the fastest spacecraft ever built. It was called the Arrow.

The Arrow was set to launch on the 23rd of October, 3013 from the Universal Space Research Centre on the North Pole of Mars. Housing a crew of eight, including me, the mission of the Arrow was to setup a base camp on the planet Trapist-2B. The base camp would serve as a laboratory to study the atmosphere of the planet and the soil conditions. The primary question this mission was aiming to answer was: “Could humans survive on planets outside our Solar System?” The target planet was 7 lightyears away from Mars. The Arrow was set to reach the planet in 12 years.
The launch date had arrived. The entire planet of Mars was watching the live telecast of the launch. The planet had the air of excitement. The media was calling it the “Achievement of the Century”. Ten seconds later, the Arrow was racing towards unexplored and unmapped space. I felt proud of myself. This was, after all, the Future of Travel.