With our new American Tourister bags packed and a quick prayer on our lips to every God/Goddess and angel who guides travellers, we set out from Guwahati early this morning.

We were filled with conflicting emotions, relief that we were leaving the cacophonic, chaotic, polluted city behind, anticipation of what was to come in the next 240 hours, excitement at finally being able to visit some places from our extremely long “need to visit” list and the subsequent thrill of being able to scratch them off our list, sadness and guilt that we had to leave our darling Bacardi behind (who was sulking & clawing at us the whole of yesterday) and an overwhelming sense of adventure.

Within a few minutes of getting into the car, our biggest stress point simply vanished. We have both done office group trips where the guide didn’t have much knowledge and was only interested in pushing people towards the next “souvineir” shop or “handicraft” factory. Dipankar quickly allayed this fear by giving us lots of relevant information about our trip. He answered all our questions, intelligently, accurately and honestly and we had no more qualms about letting him take charge for the next 10 days.

The first roadblock we had to cross, was getting across the Brahmaputra. This mighty river flows across 3 countries with 1900kms in China, 825kms in India and 327km in Bangladesh. In Assam, there are only 3 bridges to cross over to the other side. We took the Saraighat bridge near Guwahati, as the other 2 bridges are 160 and 180 kms away in opposite directions.

Given that this is a 2 lane bridge and vehicle breakdowns are common, crossing over this 1.3km stretch could take anywhere from 5mins to 6hours. We were lucky to do it in half an hour.

Once on the Northern bank, the road was practically non existent for the next 30kms or so, but then improved considerably. We were headed to Tezpur for sightseeing via NH 52 and stopped at NRL dhabha for a cup of coffee and Assamese style breakfast of

Lucchi Torkori (puri sabji). Service was excellent, location was clean and more hygenic than a lot of city restaurants. They even have a seperate air conditioned family section. 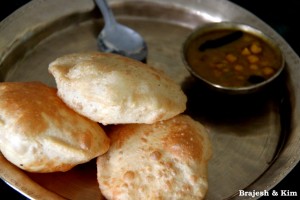 Within 4.5 hours (including our breakfast break) we had covered roughly 160 km and found ourselves in Tezpur, after a photo stop at Kharupetia famous for its huge volume vegetable market. 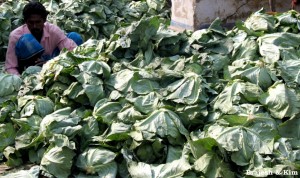 Our first stop in Tezpur was the 6th century Da Parbatia temple dedicated to Shiva during the Gupta dynasty rule. Little remains of the original temple except a beautifully carved doorway bearing the twin sculptures of Ganga and Jamuna. The current Shivling is a much more recent installation. 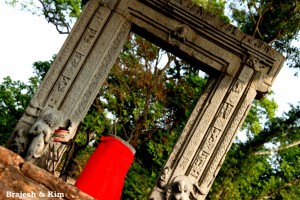 Tez in Assomiya means blood. The name Tezpur name comes from the Harihar Yuddh which supposedly turned the city into a bloody warfield. Today, the city is extremely clean, green, calm and orderly. The mythology behing this nomenclature dates back to King Banasur – a Lord Shiva (Har) devotee, whose daughter Uma saw a vision of a prince in her dreams. Her best friend

Chitralekha drew him from Uma’s description and he was subsequentely identified as Aniruddh, the grandson of Lord Krishna(Hari). When these star crossed lovers met up, Aniruddh was discovered by an angry King Banasur and imprisoned in a prison of fire (agnigarh). Lord Krishna came to free his grandson and Lord Shiva intervened on Banasur’s behalf, leading to the Hari-

Har Yuddh (war) which converted the city into a city of blood. Hence the name Tezpur – Bloody City. Lord Brahma interrupted the warring Gods and forced a truce. Uma and Aniruddh were married and now Tezpur is also called the “City of Eternal Romance” 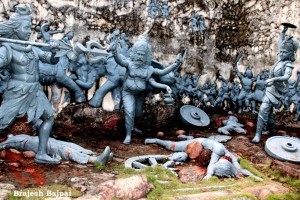 The Agnigarh today, is a beautiful park set on a hillock (supposedly on the same spot where the original fire fortress of myth, stood), with wonderful vistas of Tezpur from its summit. The Park has sculptures commemorating this story, lining its paths. There are also a few “live” installations demonstrating that Tezpur is indeed the City of Eternal Romance. 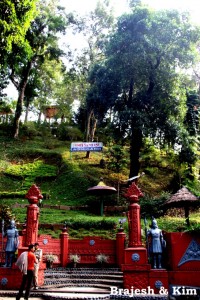 The other historic temple in Tezpur is the Mahabhairav temple. It is believed that King Banasur of the legend also offered his prayers and penance to Shiva at this spot beseeching his aid. The stone Shivling at this temple apparently grows over time. Dipankar who is from Tezpur said that he was disbelieving of this tale initially, but has seen it increase in height, over time, with his own eyes and is now convinced that it is true. It is currently the largest naturally ocurring shivling in India. It is also belived that an underground passage exists from here to Agnigarh. 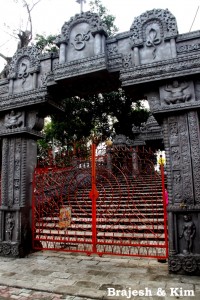 After Tezpur, we were supposed to visit a tea garden and a tea factory in Balipara, but the workers have apparently gone on strike and its not safe to visit the area during agitation. So we’ll check in the morning if we can actually do this before we leave to Nameri.

By the time we drove from Tezpur to Balipara (about 40 minutes) it was 4pm and the sun had already started setting. We were dropped at the Wild Mahseer a beautiful heritage property (tea bungalow) in the middle of a tea garden. The main bungalow is over a 111 years old and the 4 peripheric bungalows are 50-70 years old. It was too dark to explore the outside of the premises, so we contented ourselves photographing the antique interiors, before we got down to the hard business of downloading pictures, sorting, editing, blogging and uploading. The staff here have kept us fortified with lovely freshly brewed black tea sourced from the surrounding gardens while it rains and thunders outside. 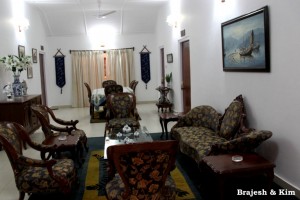 We have been having great fun so far and hope that you are enjoying this journey through our eyes. Drop us a comment if you have any suggestions. We are always open to them.