Antarctica: A journey to the worlds end Day 5 – Day 7

Once again it was, fortunately, a calm day with a beautiful morning. The ship was already positioned in the Penola Strait ready to allow us for a visit to Petermann Island. Though some icebergs might difficult our attempt to reach the island, we could step on the rounded rocks near the Argentine hut, named “Refugio Naval Groussac”, and proceed with the quest for Adelie penguins.

Some Fur Seals were already waiting ashore and, of course, lots of Gentoos too. Walking on icy snow and somewhat slippery rocks the staff showed us the way to see the penguins with the blackheads and the white ocular ring. Cormorants are nesting in the area as well. The visibility was very good and it was easy to reach the lookout point that has been offered on the southwestern end of the island. Skuas were always around the chicks that were being fed by the adult penguins. A gentle walk and time to admire the views of the peninsula across the Penola Strait consumed our morning and we had enough time to visit the island named after the German geographer August Petermann.

Once on board we enjoyed lunch and got prepared for a visit to a scientific Antarctic station from Ukraine called Vernadsky. Since the group had to be divided in two, we could also inspect a historic house, Wordie House, which in fact was the initial Base, precursor for the future UK Faraday station that operated until the early ‘90s. When the British government was looking forward to discontinue their activities there and dismantle the facilities in the Argentine Islands, they came across a request by the Ukarine authorities concerning their needs to develop Antarctic research and had an agreement to transfer the station from the UK to the Ukarine for just 1£ under the condition that the east European researchers would continue with the collection of data and research programs that the British scientists commenced several decades before.

The visit to the scientific station was a guided tour inside their working areas, offered by the different members of the Ukrainian staff, the meteorologist, the biologist, and the medical doctor, among others. Surprisingly it ended in the southernmost bar they have in the upper level of their main building, where they have a common area to rest. The base commander and his colleagues offered us some “homemade Vodka”, opened their Post Office for sending our post-cards, and sold some of their traditional items in the gift shop, while we were all having nice conversations with them. Our passports got a stamp too, which is a perfect reminder of our visit to the southernmost point of the trip. 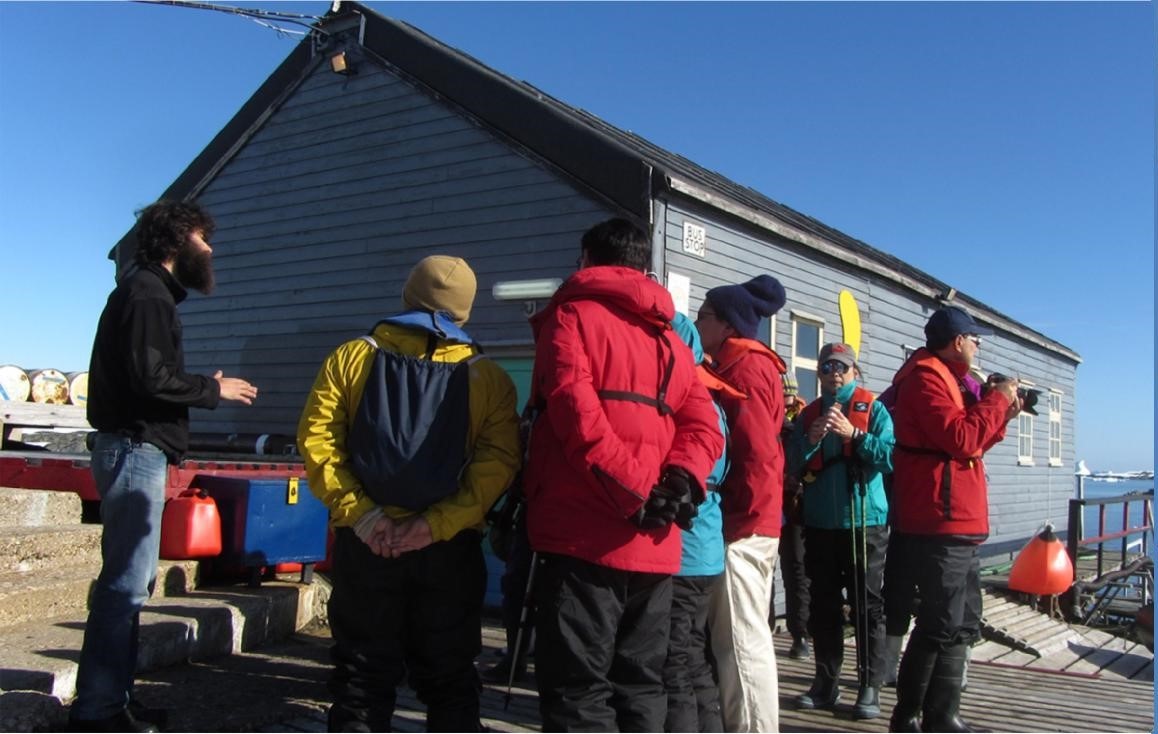 At the end of the day, it looked possible to go so we would attempt to pass through this narrow and scenic opening limited by steep cliffs of rocky mountains and hanging glaciers.

This was a wonderful end of the day with the Lemaire Channel navigation and another spectacular sunset on the open ocean to the West. While having dinner the ship moved further North along the Gerlache strait for a new location of Antarctic explorations.

After a wonderful breakfast, we got prepared for our first continental landing! It was at the Argentinian base “Brown”, named after the Father of the Argentinian Navy, the Irish Admiral Guillermo Brown. Half of the group went on Zodiac cruising and the other half landed, taking turns afterwards. The scenic view, for that on land, delivered to some of us a couple of glacier breakings, while the others spent some time sledging on improvised tracks. Sarah received us on the top of a little cliff, showing us, for the first time, a Deschampsia Antarctica, one of the two native flowered plant species. She found also some larvae from a “wingless fly”, Belgica Antarctica, very tiny, under the rocks. During the zodiacs cruises around the Paradise Bay. We make use of all the information we had from the previous geology lecture and H-ice-story recap from the night before.

Slowly, the cloudy sky opened, letting wonderful warm sun rays to reach our faces. And during this so nice feeling, a new smell, that came revealed a surprise, an “asado” (barbequed meat) was being prepared: the ship has its own “parrilla” (where it was prepared).

As we sailed to Foyn Harbour, in between clouds and rain, we get to spot many Humpback whales, in different groups, showing us most of their physical displays, almost everywhere. The ship sailed in circles to let us keep on this observation activity. Zodiac sailing was possible, so we took turns for it.

More humpback whales, fur seals and icebergs. The staff showed us a 1915 shipwreck: the Governoren whaler’s ship. The stern was submerged, what it was still possible to see the wooden deck, some barrels and the exploding harpoons. It was incredibly preserved. Between the snow and more whales, we returned to the ship to have a hot chocolate. After we regained some energy, we had a short recap of tomorrow’s experience and the necessary briefing for the expected sailing. After dinner, some remained in the bar, and the exhausted went early to bed.

Last day in Antarctica, almost last landing. Deception Island received us with a glorious entrance at sunrise. Through the Neptune’s Bellows, we sailed through up to Telefon Bay, near Foster Harbour. Deception Island is an active volcano, which erupted several times (1800, 1812, 1842, 1871, 1912, 1956, 1967, 1969 and 1970). This is the largest of three recent volcanic centres in the archipelago. Deception´s rim has an average elevation of 984 feet (300 meters), with its highest points at Mt. Pond to the east and Mt. Kirkwood to the southwest. Above 328 feet (100 meters) Deception´s cinder motif yields to glaciers and ash-covered ice, which reach the sea at many places along the coastline.

The landscape is full of volcanic rocks and sands, blacks and whites paint the scenery. We went hiking to one little hill, from which we spotted a hidden little lagoon and a couple of streams, which were born from a very dark glacier. It was strange, one felt a little desolated, with no animals nor plants to look at. Back at the ship, and after lunch, we could get prepared for a fantastic ‘momento’: the Antarctic Plunge at Whaler’s Bay, near the Bellow’s. Many of us wore a swimsuit for underwear, just in case. In the land long area, there used to be some buildings, which were initially used for whale’s oil extraction (and many other deeds with the rest of the whale’s body). It eventually becomes a British scientific station, and it was destroyed after the eruption between 1969 and 1970. The beach, station and its sorroundings were full of southern fur seals, which were pretty amazing. These animals seem to be peaceful and joyful, but if feeling at risk or get intimidated, they can sprint like a dog. And bite like one, too. Walking along the abandoned buildings and keeping safe distance, we returned to the landing point. Fumes all over the beach, due to the volcanic remanents underground, that heated the sand and water on hiding tides. When the tides begin to lower, steam arrises between the volcanic sand. And the expected materialized. The Plunge wasn’t for everyone, but those who dared will keep an unforgettable experience. The day ended with a windy and very cold evening. At night we sailed back towards the Drake Passage.