Visit Austria with The Wanderers

The US visas for our co-travellers were not happening which meant that we had a whole week of vacation before proceeding to New York and Columbia University to attend our son’s graduation. With barely 10 days left, getting a visa from the country of our choice (Spain/Portugal/Greece) in time was difficult, if not downright impossible. Our travel consultant, Farah from Wanderers suggested Germany (of course, the Germans would be the most efficient!!) as that was the only consulate that would give us a visa in a week. So we planned to visit Munich (our port of entry), Vienna, Salzburg and Budapest.

Europe is one of our favourite traveling destinations for all the variety it offers…scenic surroundings, history, architecture, art, cuisine and good weather….if you are lucky!!

We landed at Munich and were pleasantly surprised to find ourselves upgraded to a suite at the Le Meredien – what a nice start to our holiday! We wandered around the city on a Hop-on Hop-off tour that allowed us to spend as much time as we liked at any of the spots or skip ones that did not interest us. The problem, however, is that sometimes by the time the guide finishes his explanation in three languages the object of his verbosity is left far behind!!! One of the must see places in Munich is undoubtedly the BMW Museum. This ‘Mecca’ for automobile fans, it impressed and intrigued even a casual visitor like me. The sprawling Scloss Nymphenburg spread luxuriantly amidst acres of well laid gardens is beautiful too. Munich seemed a friendly city and it is a relief that English is more widely understood now than it was during our first trip to Europe in the 1990’s. 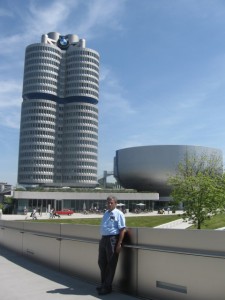 Kumar outside the BMW Museum, Munich

One of he highlights of our trip was the train journeys between destinations. Farah did not have to work too hard at encouraging us to splurge and travel first class. It may have cost us an arm and a leg, but it was worth every penny. The trains are clean, fast, and efficient and our seats were booked and marked out with our names. We were met promptly at all the stations by distinguished looking and extremely courteous chauffeurs and many of them were quite knowledgeable about the city and its history. To our astonishment we also encountered a couple of them who had traveled to India!!

Austria is beautiful…probably as good as Switzerland. We spent 2 days at Vienna which is a huge bustling city full of the most beautiful old buildings. On our first evening at Vienna we visited the Kursalon theatre for a musical performance of Strauss melodies. It was very entertaining and the female lead vocalist irrevocably reminded one of the famous Bianca Castafiore (of the Tintin comics fame) even though this lady was pencil slim and very pretty!!

An evening city tour took us up a TV tower from where we could get a beautiful view of Vienna and the Danube by the light of the setting sun. The highlight of the tour was a visit to a little tavern with live musicians and a warm and cozy ambience. We spent a lovely evening chatting with tourists from around the world, sipping wine and enjoying the lively melodies – waltzes, folk music, and even the theme from ‘Titanic’! 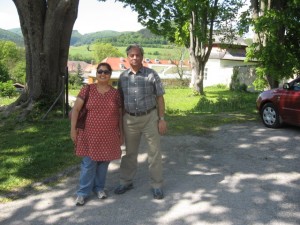 A day trip took us through the beautiful countryside to the Mayerling hunting Lodge with its haunting history of the tragic romance of Crown Prince Rudolf and his mistress Baroness Vetsera. The lodge has now been converted into a church and nunnery and incredulously the bedchamber where the lovers were found dead is now the chapel!!! 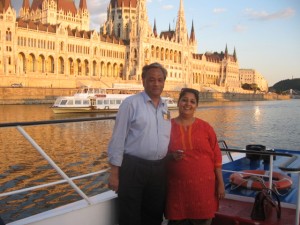 Kumar and I on the Danube River Cruise, Budapest

Following the Danube further south brought us to Budapest (Hungary), another old and historic city with a huge rambling castle and grounds sitting atop a hill. Our guide, Catherine took us on a 4 hour walking tour around the city and yes, up the hill to the castle as well. Because their economy is in a shambles, the city seems a bit run down but it is very beautiful nevertheless. The city has a lot of history of invasion and influences of different cultures as, pretty much like Rajasthan in India, it bore the brunt of invasions into Europe. One of the advantages of the walking tour is that one gets to see curious and interesting little known places, charming inns and buildings which would otherwise be lost in a group tour. It was also lovely talking to Catherine as she was really knowledgeable and was quite easily the best guide we had. That evening we went for a performance of Hungarian Folk dances which was exhilarating. The dances were energetic and intricate, the music foot-tapping and the costumes gorgeous.

The Danube at Budapest is broad and majestic and divides the city into its two original quarters, Buda and Pest. The evening river cruise on the Danube beckoned… and watching the lights come on and light up the elegant and historic buildings and bridges on either side of the river was a sight worth seeing. Hungary is also famous for the delicate porcelain and dainty lacework …but it is prohibitively expensive! 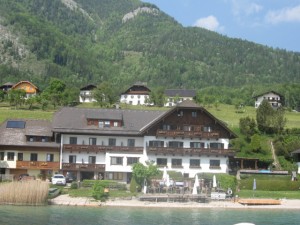 A view of St.Wolfgangsee from the yacht

And finally we reached Salzburg is probably one of the quaintest and most charming places we have seen. Right from our heritage hotel, the Aldtstat Radisson Blu to the Salzach river, its just picture perfect.

The hotel is housed in a 600 year old building and has been renovated most tastefully. The coffee shop, called Picnic, had delicious food and we found ourselves eating there almost every day. There are many well organized tours to see every part of Salzburg including the hugely popular ‘Sound of Music’ tour (and, NO, we did not take that tour. Its like one of our chauffers said, “The movie was made 40 years ago and people still want to run around like Maria Von Trapp!!”). One highly recommended trip is the one to the Salt mines and another to Eagles nest and the Nazi bunkers. The latter is a chilling experience. Also, not to be missed is the Lakes and Mountains trip that stops at the tiny village of St.Wolfgangsee. Yes, its all very touristy and recreates the ambience of tiny picturesque village with hazaar quaint shops selling zillions of overpriced souvenirs, but its fun as long as you don’t think this is the real Austria. What is worth seeing at St.Wolfgangsee, however, is the winged Gothic altar by Michael Pacher (one of only 2 that he made). Pacher’s masterpiece is considered one of the leading and most remarkable carved and painted altar shrines in all of European art. Do not forget to pick up your supply of ‘Mozart Balls’ before you leave Salzburg, they are available everywhere!

So what did I enjoy most about the trip to Austria? Undoubtedly the lavish breakfasts that were spread out each morning no matter where we stayed. Nothing like starting a day with a King sized repast and then walking it all off exploring the fascinating and engrossing cities and countryside.

So here’s a HUGE ‘Thank You’ to Farah and The Wanderers – All the meticulous planning and the excellent arrangements certainly made our holiday a truly memorable one.