Asia (Indian-Subcontinent), Cuisines around the world

Things to eat in Mumbai

Well, one is either a street food fan or simply shuns away from it. 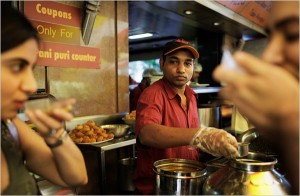 As I sit down to write this piece, I can already see the image of my  local ‘bhaiya’ (the ‘gourmet’ chef who dishes out the delectable delights on the Indian streets)  dishing out the most delectable delights – tangy spicy puchkas, spicy hot vada pavs, bhel puris topped with raw mangoes, neer dosas, usal paav, laasi (sugary buttermilk churned with a dollop of cream and saffron), the famous nimbu  paani ( Lemon juice which has inspired the cola giants to work its flavor)… the never ending list of the sensual and sensational Indian street food goes on!  Working his magic with a single assistant, doing brisk business because everybody’s in a hurry – gossiping, sharing his views of just about everything that’s happened on the global level – yes, at times, he does talk about the stock market too…and piling plates of tangy, spicy, hot, piping food – which makes you forget about everything – when you take the first bite …because from there on starts your journey into a world where taste meets nirvana! A bite into the ‘vada pav’ (The Indian version of a burger) – the burst of the yummy flavor of the chutneys – sweet and tangy, red chillie powder, a dash of garlic, a hint of mint, a dollop of coriander and fried green chillies –   – the combination of it on any given day makes you forget all about your calories and more if you ask me! Makes you forget about the ‘home cooked food’ that awaits you…makes you forget about your mom’s words of wisdom – “Don’t eat street food – the hygiene level would land you in trouble!” But, blame it on the flavor of the masalas and the marriage of the bun or  ‘paav’ and the fried vada (fried potato balls flavored with green chillie, coriander and garlic ) with the chutneys and a plate turns into two – with the order – one for now and one for the road! That’s the lure of the street food.
Could l liken it to a seductress – yes, in a way – because when you pass through the local food stalls – the aroma packs in a punch and weaves its spell and lures you in. Like a siren, she calls out to you to come and take a bite off her! To savor her…to taste her and let her taste linger on …and it is a Herculean effort to walk away from it her without sampling her!
Be warned foodie – scrumptious it may look, the Indian street food is not for the delicate stomach!
I’ve been part of Mumbai’s street food bandwagon for as long as I can remember – as a school going kid, it was the golas ( ice shavings on a stick with countless flavors and a dash of masala to it), as a teen – it was the puchkas and paav bhajis and now, as a connoisseur of food – the lure of the street food is still strong – the bonds which formed as a kid, still holds good – so what if the pav’s wrapped up in smudged newspaper, the water for the chutneys – from god alone knows where – to the oil that’s probably been reused countless times  – the gospel truth that I and probably every street food lover follows is what’s street food – without a bit of street in it .
Even now, the menu is fairly standard – but what I see now is the  fusion – which is what makes the street food a delectable delight. A twist from the normal fare of daal chaawal (lentil and rice)  or a space far removed from the Burger and the Pizza world!  Fusion is in!
Lip smacking, yummylicious, scrumptious gourmet delights…street food is chic, but what makes it sexier is the fusion!

What on offer in the mix and match world of Fusion Indian Street Food:

Paalak Chaat (Delhi): Move over maida, because street food just got healthier – puris made of spinach and served with the usual chutneys, yoghurt and masalas.