An account of a travel to South & West Sikkim

(Shubendu Banerjee is a passionate traveler. From the misty mountains of Sikkim to the dense jungles of Bandipur in Karnataka he has traveled to give a free reign to his adventurous spirit. Now, settled in Bangalore with his wife and son he continues to wander into unknown territories as often as his job allows him to)

Our passion for travel & adventure took us to Sikkim with the objective of uncovering the unspoiled beauty of the mountains. We (6 of us) packed into a Sumo from Siliguri, on our way to our first destination Rabangla. As we moved into the limits of Rabangla village, we realised its serenity & remoteness. Made of a couple of scattered houses over the hillside, one main street with a few shops, Rabangla formed a settlement nestled in the serene lap of the mighty Himalayas. We moved into a very beautiful guesthouse (Mt. Narsing Resort), which had been done up in a rustic manner comprising of a sitting arrangement outside, a large log cabin and an open thatched dining space that was very nicely decorated. The living area comprised of cozy tents with the most modern interiors. The guesthouse gave us a sense of being one with nature. A lovely view of the valleys below and the clouds above enthralled us as we sat down for a quick hot meal.

The afternoon was spent walking up and down the only street of Rabangla and savoring the beauty of the mountains. The evening was spent at the dining space, sitting on logs, which served as seats and tree trunks as tables discussing the topics that interested us. Our host lighted a small bonfire for us in the middle of the dining space and we sang and danced away late in to the night. After dinner, the cozy tents helped us to unwind from the day’s journey.

The only things that were unfriendly at Rabangla were the leeches. We had to be careful not to step on to the grassy parts of the road, as the leeches would climb on to our feet at every opportunity. In fact, we had to run between the tents and the dining space, sometimes parading with heavy steps or breaking into a sprint, so as to avoid the onslaught of the blood-sucking leeches.

Morning was as beautiful as paradise. By the time the sun made its way out of the mist to spread its warmth on the mountains, we were ready to visit the Ralang monastery. A short drive up the narrow treacherous mountain path brought us to the gateway of this beautiful monastery. The monastery was straight out of a picture postcard. Its colorfully decorated walls, gold plated crown and gigantic size left us spellbound. A prayer was in progress inside, which provided us with a rare view of prayers conducted the Buddhist way. The monastery contained a huge golden Buddha in the center surrounded by innumerous small ones. 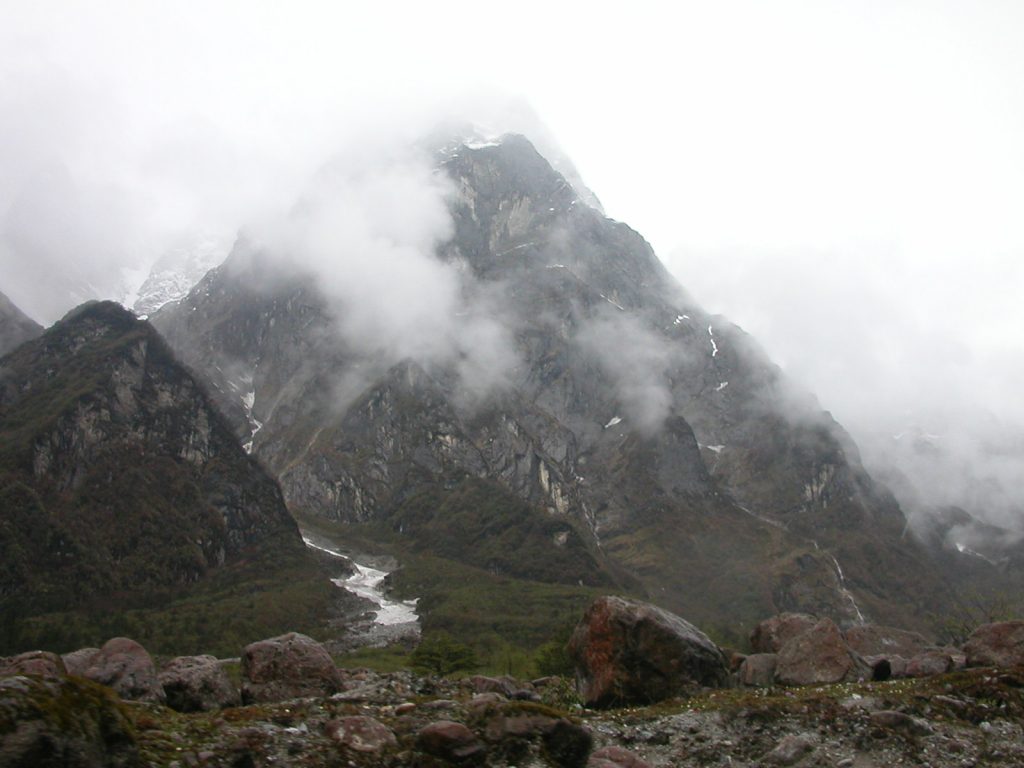 We returned from the monastery and after a quick meal we bid goodbye to the lovely village. We were soon on our way to Yuksom. Tashiding monastery was on the way and so we decided to halt there briefly. Leaving our Sumo at the Tashiding village, we had to trek up the mountainside to reach the monastery. It was a lovely trek up. The moving of the clouds in the valleys below, the sun’s rays illuminating the mountain tops and the greenery of the mountainside all provided breathtaking views. Halfway up the trek, we came across the Buddhist flags that fluttered by the pathway leading up to the monastery. Interestingly, on reaching the top we found that one of the monasteries was controlled by women and it was them who performed all the necessary prayers and rights. Soon, it was raining cats and dogs and we were completely drenched. Our shoes were full of water as we trekked down the pathway to reach our Sumo.

We reached Yuksom late in the afternoon. Yuksom seemed to be a larger village than Rabangla with playgrounds, a school, government offices, a police station and even a hospital. We had reached the last point of a motorable road and if one wanted to see the beauty of the Himalayas beyond Yuksom, one had to trek from there on. We were told that a large number of expeditions to various Himalayan peaks were kicked off from Yuksom. We parked in a hotel that had all modern amenities including TV, hot water and spacious rooms. Weather was not on our side and light persistent drizzle continued through the evening. The rains did not deter us from taking a walk down the road to see more of the place. Since it is located in a valley, it is surrounded on all sides by high mountain ranges. Often the mist would envelop the valley visibility.

We were told that the oldest monastery in Sikkim– Dubdi, is located in Yuksom. The next day, we started for the monastery after a good breakfast, armed with salt in case we encountered leeches on the way. The path was a mountain tract in the dense forest with numerous springs on the way. The leaves of the trees had fallen to make a soft cushion, which muffled our footsteps. Later, as we found out, the leaves also covered a bed of millions of leeches that had made the pathway their home. Leeches, that jumped up on our feet at every opportunity infested the tract. The drizzle, the darkness of the forest, the leeches — all together weaved an uncanny eerie feeling. We were soon at the top. The old monastery building seemed to have preserved the culture & tradition of Buddhism. An old monk lived in the small quarter next to the monastery. Time seemed to stand still for him in this very remote place away from the interference of human civilization. Having seen all of Dubdi, we headed down. Coming down from the monastery was like a race against the leeches. No one stopped even for a gasp of breadth. Neither the rain nor the slippery pathway could stop us from running down the mountainside. Within half an hour we were at the relative safety of the small hospital at the Yuksom village. We rested on the veranda of the hospital and checked our shoes for the leeches before proceeding back to our hotel.

Next, we set out to see the coronation stone. The place has a huge stone throne with very old and gigantic fir trees as a backdrop. A monastery and a small school were located adjacent to the coronation throne. It was a lovely sight to watch the little monks in the making, learning the teachings of Buddhism.

The next day we left for Khechoperi Lake, which is regarded as a very holy lake in that area. As it had rained very heavily the previous night, the road was in a bad condition with lots of loose topsoil and rocks. A couple of landslides had occurred already, and the road was in the process of being cleared for traffic. The driver of our Jeep did some difficult and dangerous maneuvers, as we closed our eyes and prayed. Soon we came to about 5 kms below the lake where a huge boulder from the previous night’s landslide had completely blocked our way. We were determined not to return without a glimpse of the lake and so we decided to walk up the rest of the way. It was a wonderful walk up to the lake. The lake itself is very placid and surrounded by lush green trees. A narrow jetty connects to a platform right into the lake where we stood intoxicated by the cool, green and peaceful surroundings. The blue sky and the surrounding green forest had their reflections on the water. The Buddhist flags fluttered in the light breeze all around. Fish swam in the calmness of the lake. The lake is definitely one of the treasures of Sikkim and is a place worth venturing. 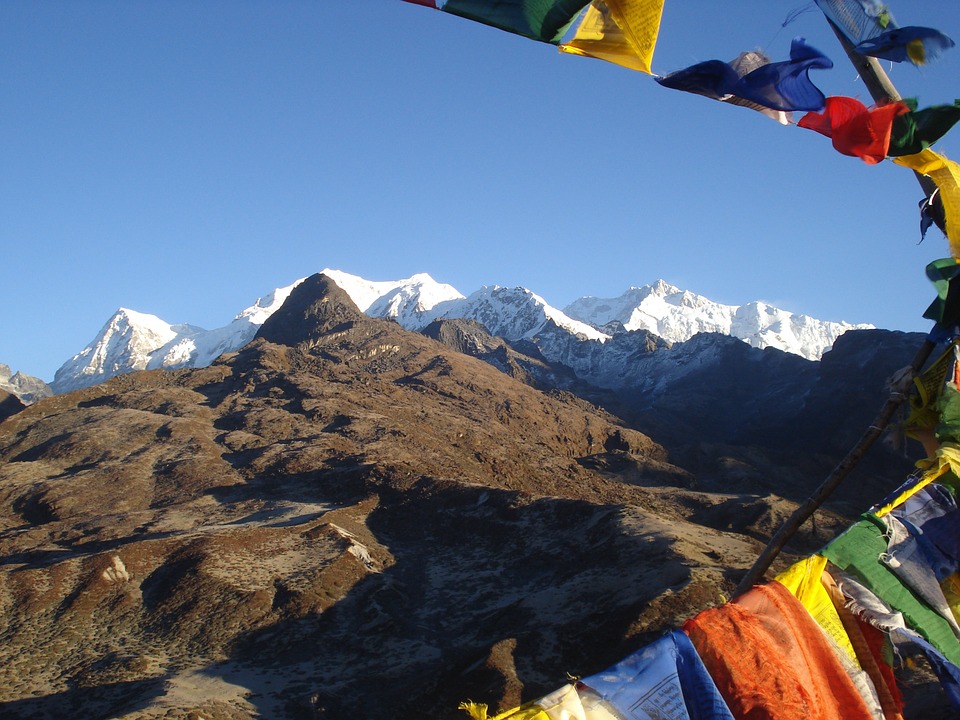 On our way back to Yuksom that day, we stopped at Fambrong waterfall. It was a two step waterfall, very steep and looked very brilliant in the afternoon light. A few locals had stationed themselves at the roadside to guide us down the loose soil, mud and boulders to reach under the waterfall. There was a crude ladder at one end, which reached up to the second step of the falls. The sight of the huge waterfall from underneath and then up the ladder was that of pure ecstasy. 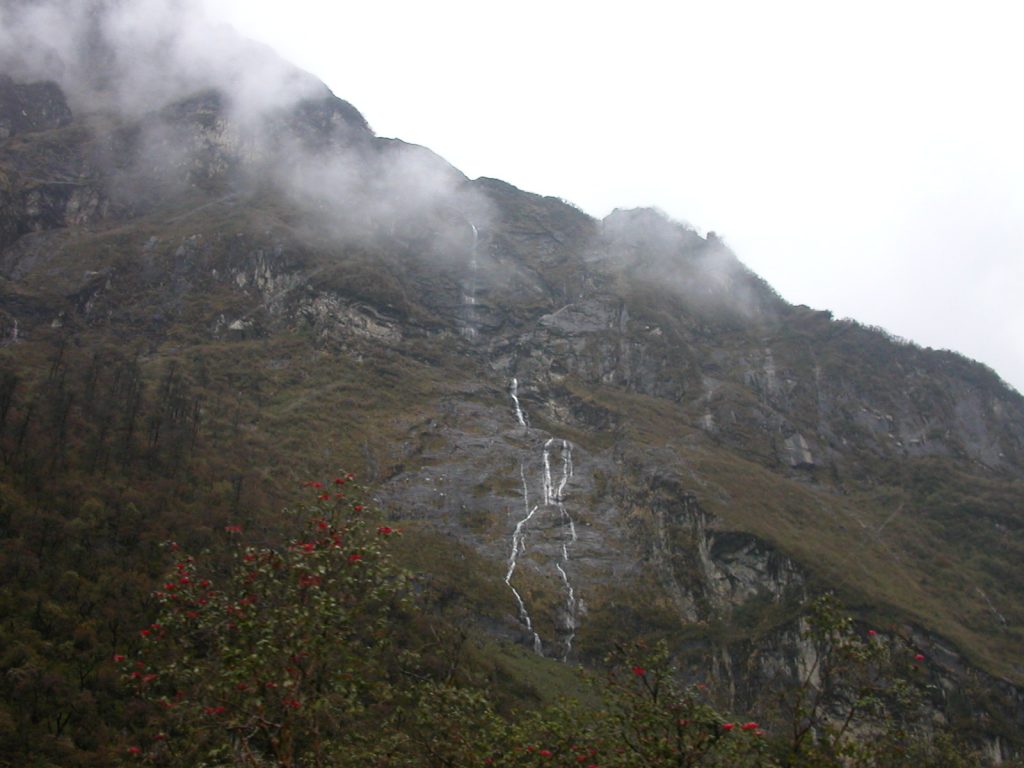 It was a very lazy journey to Pelling, the next day. On reaching Pelling, we dumped our luggage in our rooms and ventured out. Pelling seemed invaded by modern day life with a heavy population of tourists. We decided to walk to the Pemayangste monastery, which was about two to three kms away. We walked along the highway and our silent steps were occasionally disturbed by the loud noise of the vehicles. The exhaled smoke from all these vehicles polluted the mountains and was simply disgusting.

This monastery too, had the very traditional look with exquisite exterior paintings and woodcarvings. Various rooms on the 1st and 2nd floor together made up the huge prayer halls. The walls were lined with images of Lord Buddha and other Buddhist saints of all sizes. A room devoted to the scriptures of Buddhism displayed the various aspects of life in intricate woodcarvings. A small school, an office and a few quarters made up for the premises of the monastery. It was a place where one could gather a lot of information on Buddhism from a host of knowledgeable monks and guides.

Evening meant another walk down the road and we were told that the mighty Khangchendzonga (pronounced “Kanchenjhunga”) range could be seen clearly from Pelling on a clear day. The evening was cloudy and so we waited eagerly for the next morning so as to have a glimpse. Early next morning, we were woken by footsteps of people rushing to the terrace of the hotel to catch a glimpse of the range. Indeed, it was a clear morning with hardly any cloud and the mighty range with the peaks could be seen clearly in all its glory. It was a sight to behold as the morning light illuminated the whole range and there was a radiant glow all around. We could have sat there watching the splendor of the Himalayas for hours, but we had to return home.

Our return journey wasn’t smooth and we had to halt for 6 to 7 hours on the road by virtue of a landslide. Soon we were at Siliguri.

It was an extremely good vacation and the land of Sikkim is unforgettable. The mountains, rivers, lakes, waterfalls and the monasteries had mesmerized us and seem to be calling us back all the time.

Check out our latest package on Darjeeling in the mystic Himalayas.