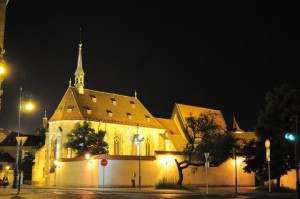 The gorgeous city of Prague

When it comes to cities in Europe –  Paris, London, Berlin, Rome –  none of these well-known cities have really made it to being the most beautiful city in Europe.  Yes, these cities have their own charm and a sense of beauty and while it’s not easy to make a categorical statement, my recent trip to Prague put it right up there with the best in the continent.

(Disclaimer: I haven’t come close to seeing all the cities in Europe, but I do have to my credit a few sojourns.)

Prague is a very underrated city in the sense that it’s not usually the first place which comes to mind when one talks about Europe.

However, friends who had visited Prague vouched for it and this was my impetus to visit the city.

Once the center of the world, today, the city is bustling…It has seen many rulers in its time, and it’s only since 1989 – when Czechoslovakia became a democracy that Prague took off as a tourist destination. 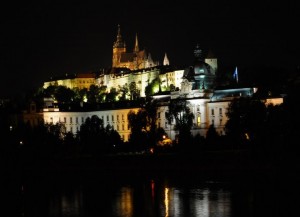 What it has:  Gorgeous monuments, great architecture and one of the most thriving classical music scenes in Europe.

The gorgeous Jewish quarter, the old town square, the river side of Vlatva are just some of the main attractions of the city. I was fortunate enough to  experience the exceptional Royal Philharmonic perform Mozart and Strauss at the lovely Municipal House.

I’m no classical music aficionado, but these guys were real professionals. The ballet and singing also added to the experience, but for me the music was the standout aspect.

I’m reliably told that Prague has a great nightlife, but sadly that’s not my thing. Whatever be the status of Prague as a hip night spot, Prague the city, is breathtaking at night. No photograph does justice to the skyline as you walk along the river – the castle on a hill in the distance, the illuminated buildings and bridges. 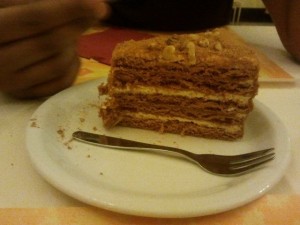 The food wasn’t spectacular in the Italian sense of the word. But it was very good. We went to a restaurant named after Marie Antoinette’s mother, which we were told serves traditional Czech food. Although we did play it safe by ordering pork goulash and a solid Czech beer, the food was wholesome, the meat tender, the service hospitable and the Medovnik (a honey cake topped with crushed walnuts) a delight. The white bread dumplings served alongside the bread reminded me of sannas served at Mangalorean dinners, as an accompaniment  with curry. There are also local liqueurs to be sampled – the Becherovka flavoured with cinnamon, anise seed and more herbs is one potent combination.

The people. Hmm… that’s an interesting one. Perhaps because I travelled from the Netherlands, the people came across as not particularly friendly. They weren’t courteous, but were never really rude either. They didn’t smile so much, but the fact that they don’t speak much English also adds to the distance. But at no point did we feel unwelcome or unsafe, even though we walked in the city till past midnight. I read only after my trip that the city has some problems with pick pocketing. Thankfully I didn’t experience it firsthand.

A relatively cheap city as far as Europe goes, especially for food and drink, although I have heard of restaurants overcharging people by charging them double tax as well as taxi drivers taking tourists for a ride.

One thing you shouldn’t try to do in Prague is try to pronounce all the names. Many words and names sound like they are missing vowels, but don’t tell the locals that. They probably know their spellings.

All in all, Prague’s a gorgeous city – worth visiting and spending time in. I know I’m going there a second time!