My trip to Thailand

Seven years after my first trip to Thailand, nothing much has changed in the Kingdom. Most of everything that really matters to a tourist like me are still ‘same same’ and amidst the loud, thumping music of Go-Go bars in Soi Bangla in Patong, Phuket the old adage of ‘no money, no honey’ still holds good. At Dragon Bar, its midnight. The Australians are here. So are the Yanks and their brothers in arm, the Brits.

To be fair, I also see a fair number of Indian tourists, most of them representing Corporate India. Sent here on ‘incentive’ missions.  Some of them with a bottle of Singha beer in one hand and a bikini clad go-go ‘artist’ in the other. They have never had it so good in their lives! Smoke fills the room as does the thumping music. Sixteen nubile lasses are swaying to the music that the DJ (wearing a balaclava) is belting out. The poles from which they swing are greasy with their sweat and each time they bend seductively towards the hangers on, there is a loud yelp, followed by grins and more swigs from the bottle. The waitresses announce into your ears that they are thirsty and would like you to sponsor their next tequila. At 400bahts a shot, you realise that inflation has caught on here as well. So, you settle for ‘olange juice’ which costs about 150 bahts a glass.

There is an air of expectancy around the bar as word spreads that post midnight there is a ‘special’ show. The DJ pulls on a piece of cloth hanging above him, a horn blares, and the girls walk off the ramp. The music changes to something more refined, something more traditional, dignified and Thai.  But something I have never associated with go-go bars before. 5 girls, who are standing unnoticed in a corner, with flower bands on their head now walk in their stilettos and sashay onto the ramp..topless.

Over the next 5 minutes, they mesmerise the audience with their gyrations that would put a gymnast to shame. The finale is Shakira’s ‘Hips don lie’ and all the girls in the bar including the waitresses, mumble the rest of the words till they reach this century’s 2nd most famous line (after George Bush’s ‘you can run but you cant hide’) and in unison they all scream ‘Hips don lie’ and jiggle their shapely backsides. These are the only words they really know. The atmosphere is riveting. I stumble out into Soi Bangla. There’s a carnival outside. Its 2am. The pubs and bars are packed to capacity. Music rips through the moisture laden air. The street is full of tourists, skimpily clad girls, transvestites, prostitutes, pimps, curio sellers and even 2 men with iguanas. And this is mid-May, the start of the off-season, brought on early this year by the rains that swept in a month before time.

There are only 2 ways to last here in Soi Bangla. You either finish your money or walk off with your honey. As an emotional high, its same same, but different here in Phuket. I wake up the next morning, the splendid views of the sea in front of me and the rain soaked beach of Patong to my right. The sky is grey and rain lashes at the window panes. The hotel, situated on a small cliff on the Southern edge of Patong has gorgeous views of the sea. One of the most badly affected beaches during the 26th Dec, 2004 Tsunami, there is now almost no trace of the tragedy that struck this peaceful place. But today is another day. In an hour, the sun miraculously peeps out from behind the puffs of cloud. We pack up quickly and check out of the hotel. A waiting car zooms off Northward to the Yacht Haven pier, a 45 min drive from Patong. Our last night  in Thailand will be spent on an island in the Phang Nga Bay. The resort, aptly called Paradise Koh Yao, on the Koh Yao Noi island is a 1hour speedboat ride away. They tell us that the ride would take us through some of South East Asia’s most spectacular scenery. 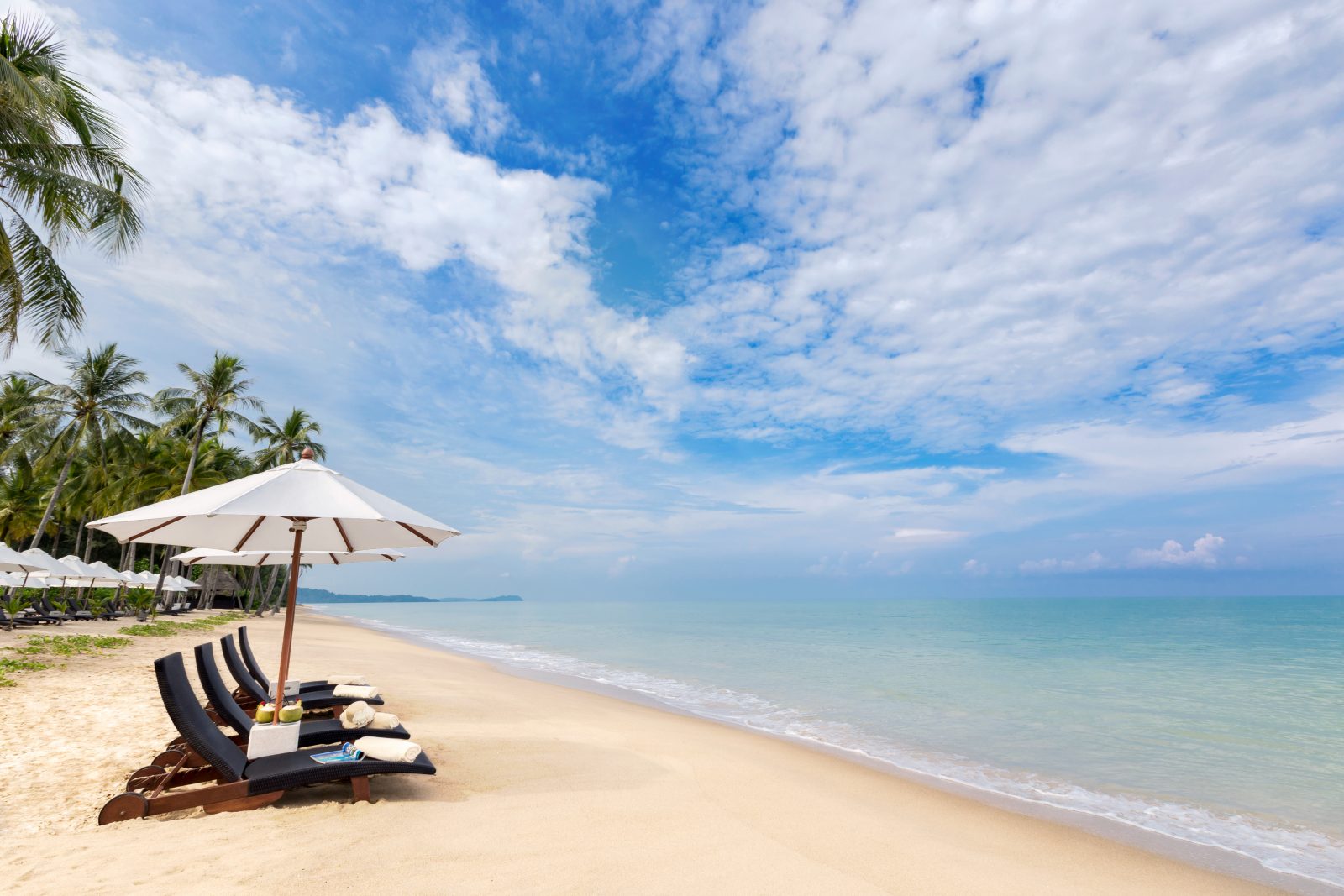 At the pier, we are met by Jo, who in broken English, welcomes and escorts us to the waiting speedboat. Within a minute we are zooming across the Bay, the Marina growing smaller by the minute. The water of the sheltered bay is calm, like a lake, unlike the maddening turbulence I had encountered the week before on my way back from Phi Phi island, when we were tossed around like an omelette in the hands of a seasoned chef. Through a small gap between two islands, the speedboat bursts out into the open sea and in front of us is scenery so dramatic, so stupendous that we look on with our mouths open. In the distance, gigantic rocks rise vertically from the emerald sea.

They are of different shapes and sizes, some small enough to hold twenty people at most, others large enough to hold 2-3 villages. They pan out in the horizon, rolling endlessly and seamlessly behind each other till they fade from view. It is a sight I have only seen in travel books and tourism brochures, but nothing prepares me for this. The speedboat swerves past a few such islands, some so close that I fear we would dash into them. The rocky crags rise vertically from the waters, clumps of trees sticking out precariously from the cliffs, while sea-gulls and other birds dart in and out of the rocks. Some of these rocky islands have sublime white sand beaches, some only a few meters in length, and I wonder how many of them have seen human footprints.

The minutes go by and on the stroke of an hour, the boat takes a final bow and turns right around the northern tip of Koh Yao Noi island and there in front of us is this magical cove, with a glistening white sand beach nestling amidst dense foliage, one end of which is guarded by a vertical cliff of limestone. On the other side, in 3-4 tiers are the thatched villas of the resort. Welcome to Paradise Koh Yao, says Jo and dramatically sweeps his hand in front of him with a flourish. We are escorted to our room which has breathtaking views of the cove. Wherever we look there is forest cover that rolls down the hillside towards the beach. The resort is spread over 10 acres of greenery and has private pool villas as well as rooms with a private Jacuzzi all of which have magnificent views of Phang Nga Bay.

We hire a jeep and go about exploring the village. The first 6 kilometers of untarred, undulating road is rendered treacherous with the overnight downpour. We navigate past banana and eucalyptus plantations and reach the main village where we ask for further directions to the pier. The predominantly Muslim population are at peace in the afternoon, taking their noon power naps. Listless children make their way home from school, some dragging their ‘strolleys’ through the dirt roads. We make our way to the Southern end of the island in an hour’s time and more dramatic sea views greet us there. At the main pier, the daily ferry is just about to leave for Phuket, resulting in some last minute flurry of fervent activity as the late passengers run to catch the ferry.

We return to the resort by dusk to the sound of a million insects orchestrating an animal world symphony. Dinner is laid out at the Italian restaurant on the beach. Post dinner, I lie on a hammock tied to two coconut trees that hang on the edge of the water. The high tide brings the water below the hammock and the ‘flip-flap’ sound of the waves lapping against the sand lulls me to sleep. The next morning, I rise late and make my way towards the beach shack where I have seen canoes the previous day. After signing up for a 3 hour session, the yellow coloured canoe is gently pushed into the sea. Armed with a life jacket, a water bottle and my limited knowledge of canoeing, I venture forth into the emerald waters of the cove.

For over an hour I row gently around the bay, slowing down as I near a rock face, craning my neck to peer into the vertical limestone formations. Sometimes I glide under overhanging branches that dip into the water. I spot a monitor lizard make its way out of the water and slithering onto a small rocky outcrop. Birds flit around me, near me and high above in the sky. Apart from the sound of the gentle swell that taps the canoe, I hear nothing else. After a while I am tired and settle in the canoe, the oar resting gently on my waist.  The sun is up and it is hot. The resort is far away. Phang Nga Bay and its rock faces stand as silent sentinels in the distance.  So much peace. So much beauty. Sometimes it’s difficult to handle both. For the first time I notice the words ‘feel free’ etched on the oar. And as I shut my eyes and cling on to the moment, I truly feel free. 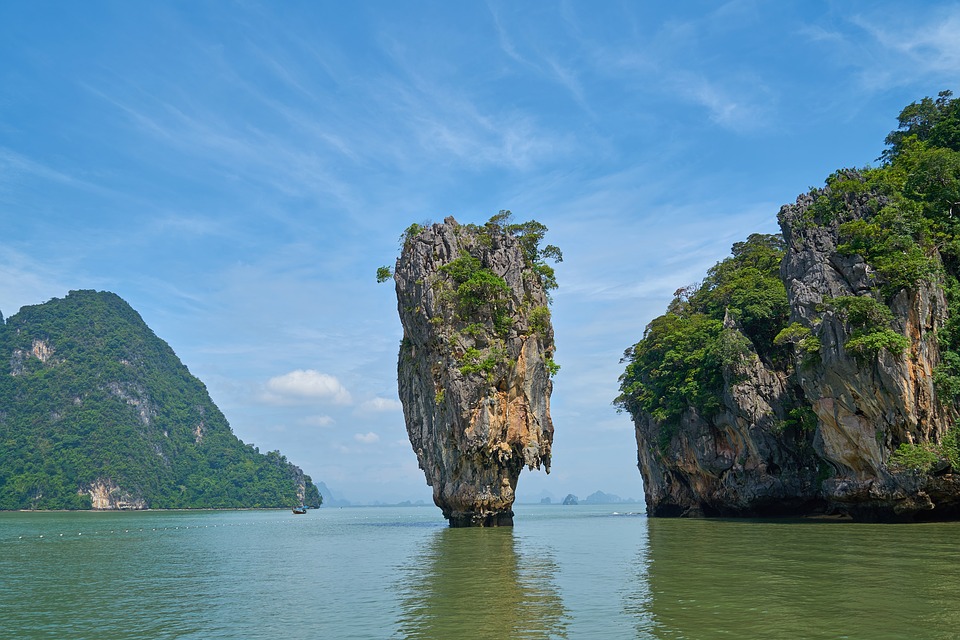 Minutes pass by. And then slowly but surely I start rowing towards the resort. Our boat leaves for the mainland in an hour’s time. We have a flight to catch. In a few hours, I will be in Bombay where life will be same, same but only different this time.