An oil economy, the celebration of fire and a rich cultural heritage give Azerbaijan its distinctive identity. Make sure you and your family discover it, before others do!

There used to be a rhyme we used to sing when we were kids: ‘Fire in the mountain, run, run, run.’ I have no idea about the relevance of that rhyme, but it certainly could be about this place: Yanar Dag in the Absheron region of Azerbaijan. Here, the fire burns all the time. And it’s been burning since, well, someone accidentally lit it maybe over half a century ago. It’s an incredible sight – a long line of angry yellow-and-orange flames licking the base of the mountain, giving it the name Yanar Dag or ‘burning mountain.’ The reason for this perpetual fire is a huge concentration of natural gas below the ground, something the Absheron peninsula seems to have more than enough of. We reached this geological marvel at an opportune time. It was chilly and we warmed ourselves up. The crackle of the flames, the fire working its way upwards, the glow around the base of the hill and the warmth of the place made it a fine fantasy setting for a scene from the Lord Of The Rings or the Game Of Thrones. 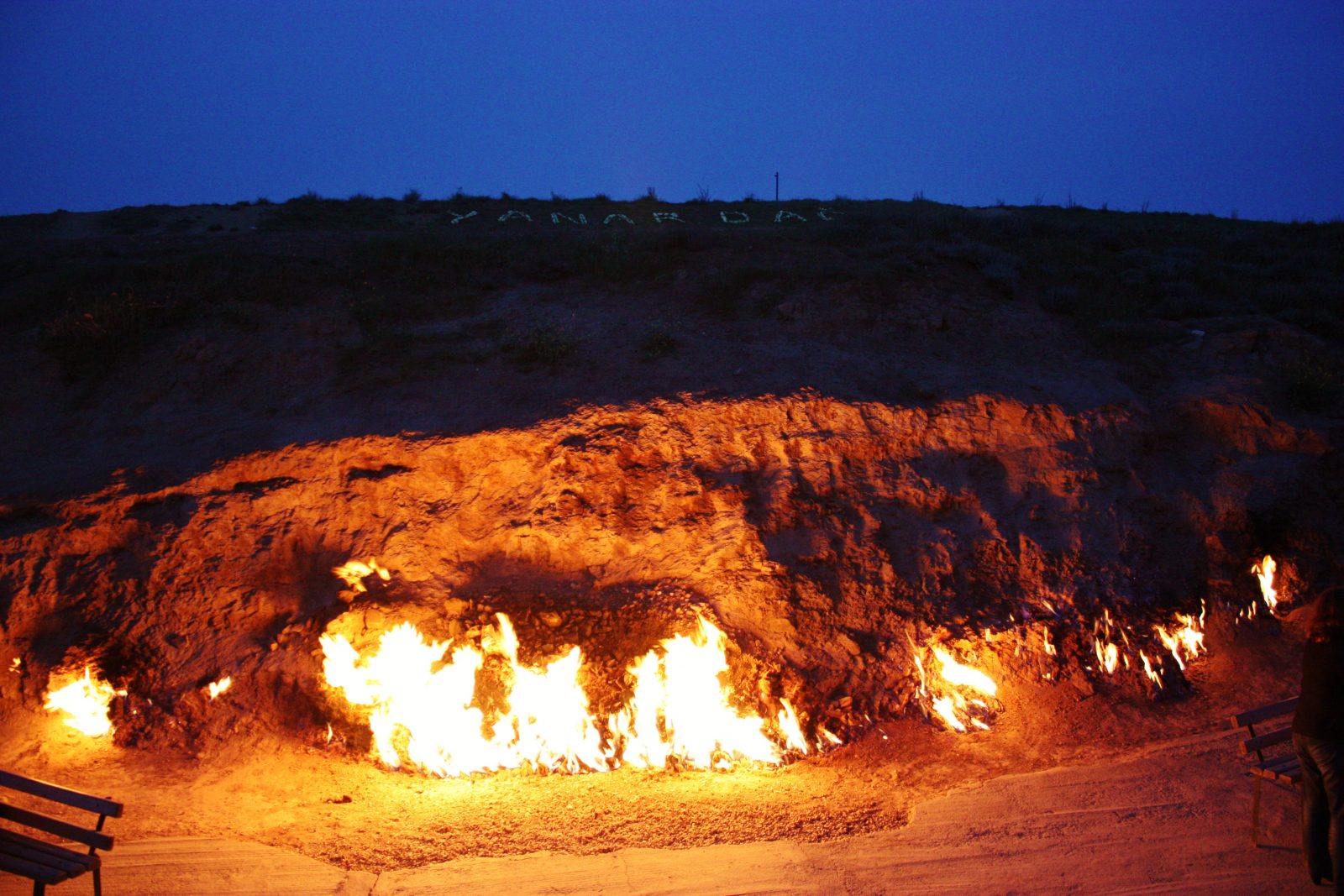 It was Yanar Dag that stoked my curiosity about Azerbaijan. As I read up about this little country sitting on vast reserves of fossil fuel, more reasons to visit presented themselves. One was Ateshgah, which started as a Zoroastrian fire temple, then for a while was adopted by Hindus and other fire worshippers as a pilgrimage spot and a resting place or caravanserai on the Silk Route. There was Baku, the capital of Azerbaijan, with its cutting-edge architecture that pushed design boundaries. Baku had recently served as a venue for Formula One races, the most-watched motorsport event in the world.  Would Baku be a brash, in-your-face Dubai wannabe or would it retain some of its Eurasian charm? It was time to find out. A call went out to The Wanderers and after a few weeks of planning, I was in an Air Arabia flight with my wife and my 12-year old son heading towards the Caucasus.

Heydar Aliyev is everywhere. The former President and acknowledged father of modern Azerbaijan, he came to power soon after the Soviet Union collapsed in 1991 and the country became a republic. Between 1993 and 2003, he put in place several policies and reforms that led to Azerbaijan slowly finding its feet and standing on its own in the comity of nations. Since the country was naturally blessed with oil reserves, Aliyev negotiated with countries and companies to drill, produce and export oil.  The prosperity this has brought is reflected in tall, glass façade towers of Baku, its burnished monuments, broad, smooth roads, a beautiful waterfront boulevard overlooking the Caspian Sea, gardens and citizens amenities. The money has also been well-used in preserving the Azerbaijani heritage and culture – a source of pride for locals, and a magnet for visitors. 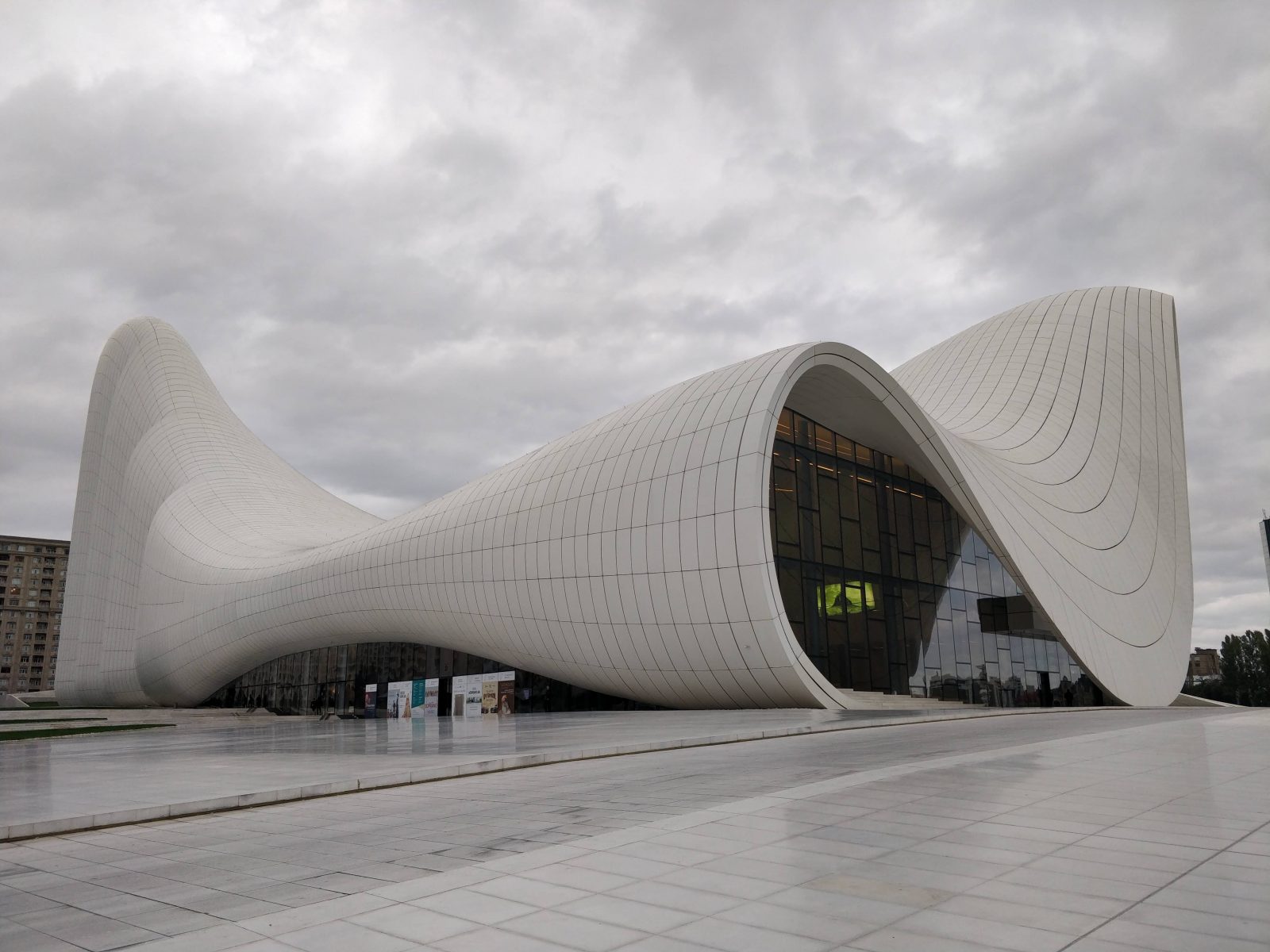 Many places are named after Heydar Aliyev, as you would have guessed. The most prominent one in Baku is the Heydar Aliyev Centre, a stunning, white, fluid monument designed by the queen of modern architecture, the late Zaha Hadid. My first vision of it was through the floor-to-ceiling glass windows of my signature suite at the Hotel Fairmont Baku. The Heydar Aliyev Centre stands out in the distance like a lick of white flame amidst all the other buildings surrounding it. To the right was the curve of the Caspian Sea, reflecting the grey clouds looming over it.

The Fairmont itself is a Baku landmark, occupying one of the three iconic Flame Towers. Our room was a beautifully laid-out suite with a large living room plus bedroom, walk-in closet and a well-appointed bathroom including a television built into the looking glass. Oh, and did I mention the personalized Rose 31 toiletries? Or the distinctive red ‘Egg Chair’ designed by Arne Jacobsen – considered a design classic in modern furniture – in the living room

Built upon a hill overlooking virtually the entire city, the Flame Towers are a modern architectural wonder. As the name suggests, the towers resemble the flames of a glowing fire. If you followed the Baku Grand Prix, you would have seen it already in the race footage. For my 12 year-old, the high point of the location was the Lamborghini showroom in one of the towers, where a monstrous Urus SUV was holding pride of place. But the best part of the Flame Towers would reveal itself to us only when night fell.

A short distance away from the hotel is the Highland Park, a somber memorial to Azerbaijani martyrs. From the Park, one gets another of those spectacular views of the city and the Caspian Sea that makes Highland Park a must-visit, especially at night. If you can peel your eyes off and turn around to look at Flame Towers, you are in for another gob-smacking sight: the Flame Towers going up in flames! The façades of the Flame Towers cleverly function as display screens by using over 10,000 LEDs, so it’s an ongoing spectacle of fire and other graphics that can be seen from virtually anywhere in the city, at night. 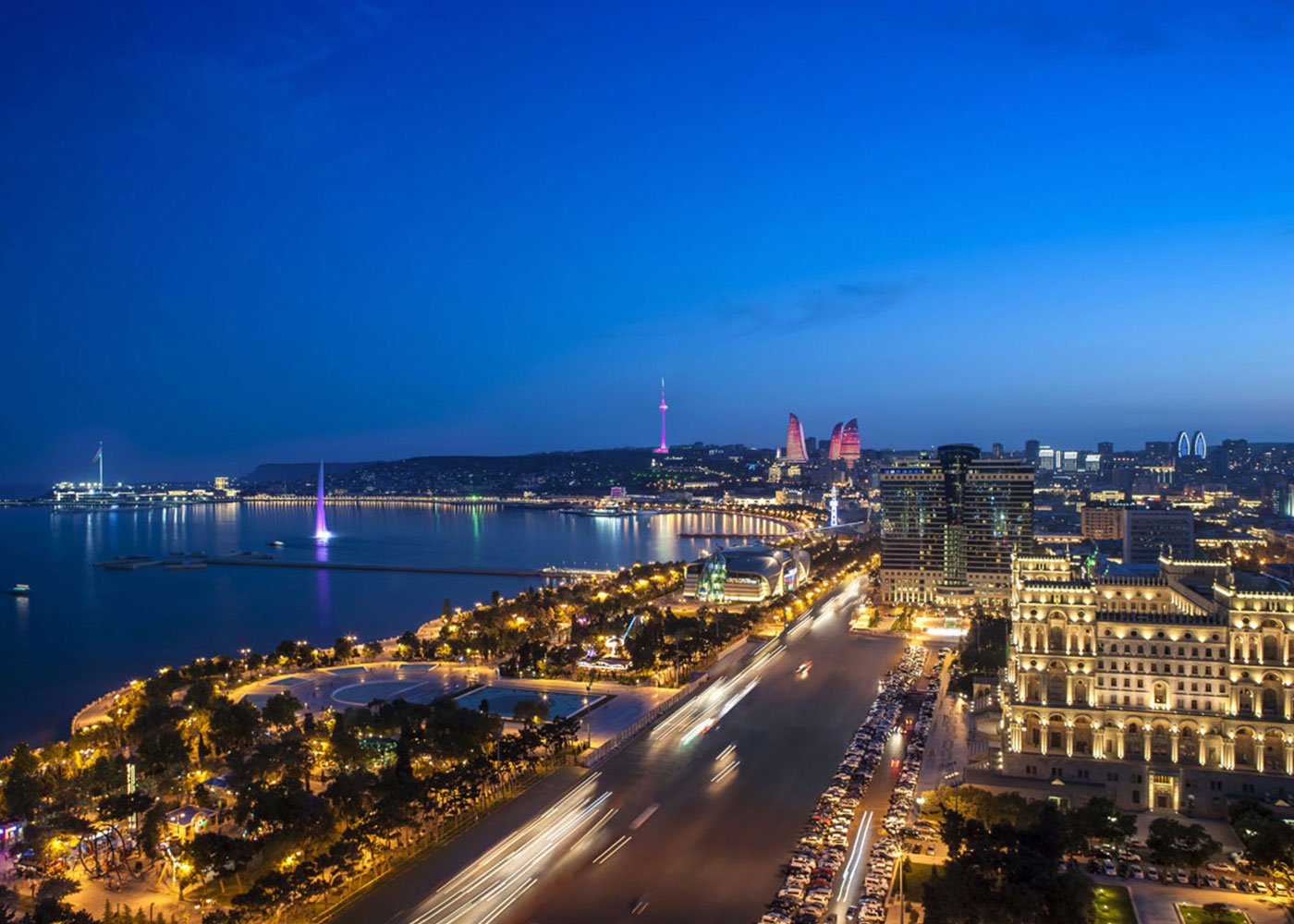 Our first meal was had at Fountain Square where we were introduced to Azerbaijani cuisine at the Nergiz Restaurant. The qutab, which is essentially flatbread stuffed with meat or cheese or garden greens, was an instant hit and featured regularly on our plates through the course of our stay. And of course, plov – which is a different take on our own pulao – done in Azerbaijani style. Throughout the trip, we experimented with different local preparations, all with the help of our guide Emin, who was ready with helpful suggestions and tips. 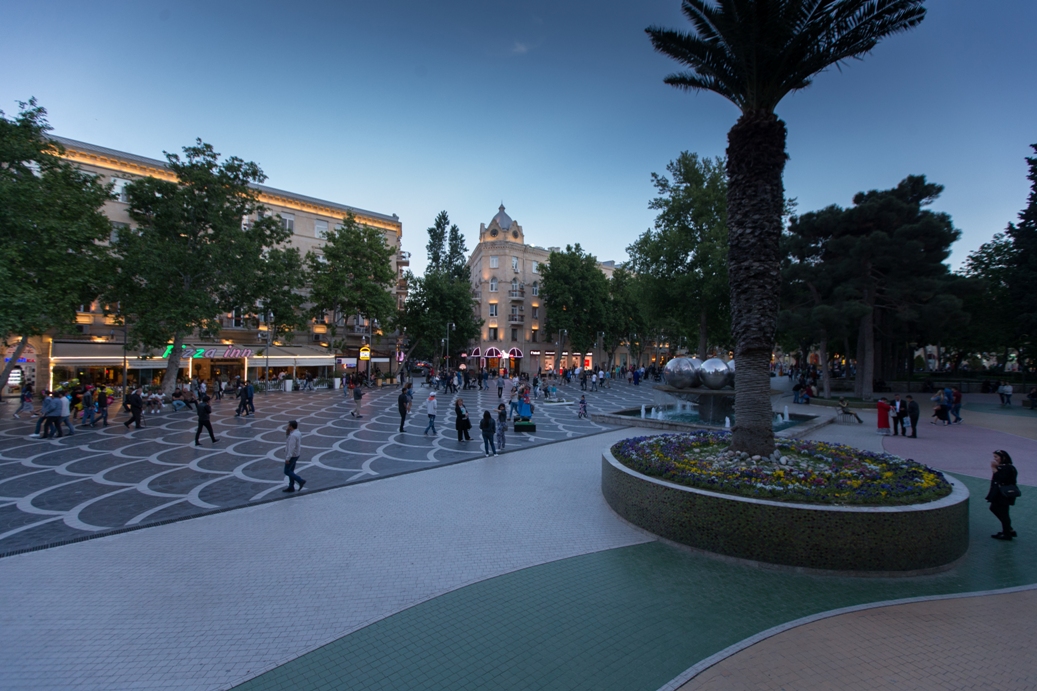 During the days, we crisscrossed the city, taking in its period architecture, built during Baku’s 19th century oil boom. As you would expect, the city attracted people, along with their cultures, from all over. Many of the buildings of this period of prosperity at the turn of the 20th century exhibit Victorian and Western influences. What was remarkable were the busts of various prominent residents of the key buildings carved in relief on the ground floor walls that showed you who stayed where. A nice touch. Of course there are heavy, concrete structures – almost Brutalist in their design – built during the Communist Soviet era. These however are offset by the flamboyance of the buildings built during the oil boom. There is something majestic about this aspect of Baku, much like the Indo-Saracenic and Neo-Gothic buildings that add to Mumbai’s grandeur.

But Baku also has an ace up its sleeve that India’s financial capital doesn’t: a medieval town in its centre called Icheri Sheher or the Old City. You need an entire day to explore this part of Baku. It is a UNESCO heritage site and the oil money has gone into bringing back its past glory. Defensive walls built in the 12th century enclose a maze of lanes, alleyways, buildings, mosques, hamams and more. To me, the most attractive part of Icheri Sheher was an abandoned caravanserai that looked so alive as if the traders had just packed up and left with their goods and their animals to other exotic destinations. You can actually visualize this resting place for travelers would have been centuries ago, with its central courtyard with a well and a magnificent shade-giving tree and rooms all around the periphery. For most people however, the Maiden Tower is the key landmark of this area – you will find it everywhere in the souvenir shops. The origins and functions of the Maiden Tower or Giz Galasy are mysterious. If you see its shape, you’ll understand. It’s a rather unique structure for a tower – perhaps it served as a watchtower combined with a defence battlement overlooking the Caspian Sea. 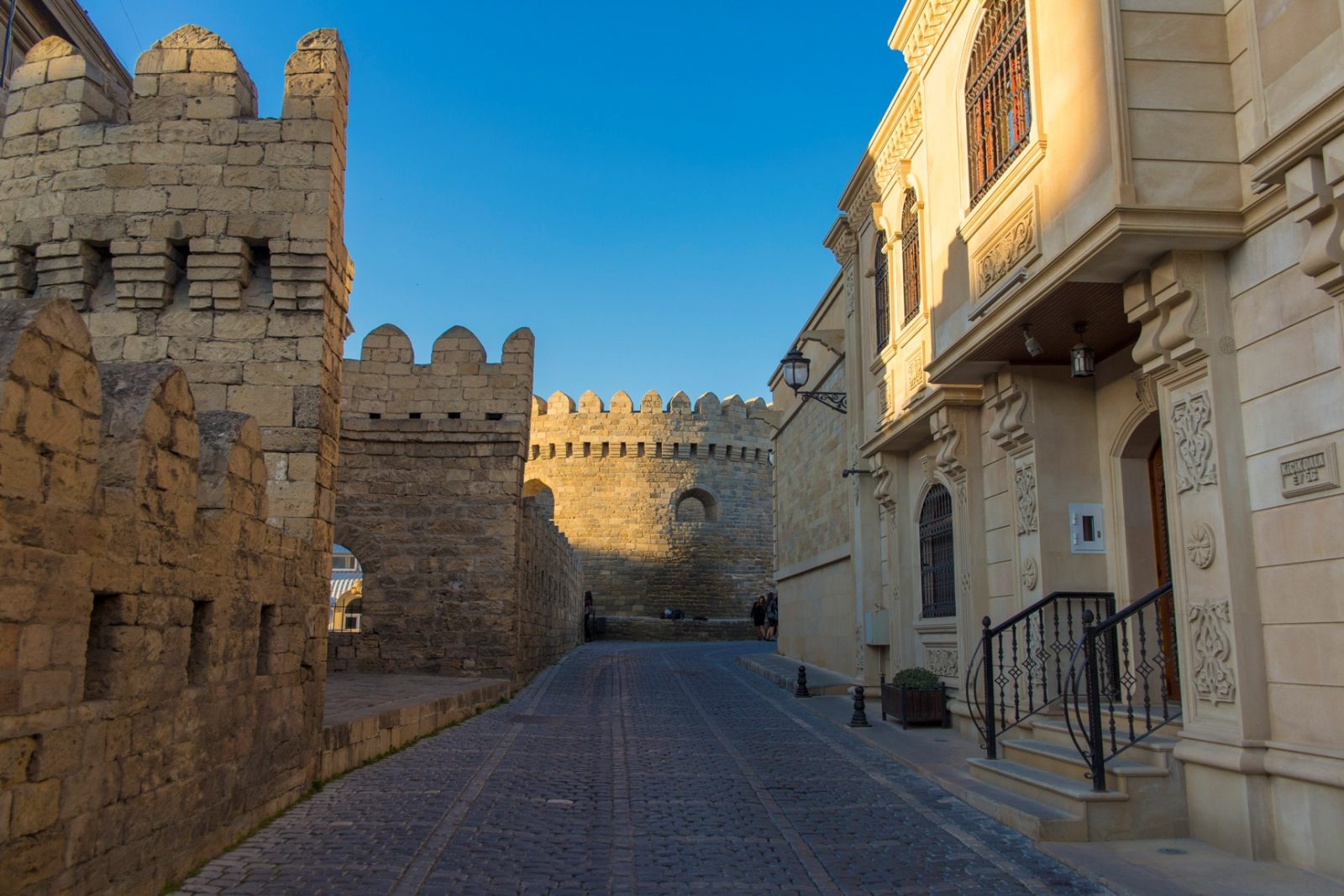 Icheri Sheher has a history going back to the Paleolithic period and there are influences as well as evidence of the presence of Zoroastrians, Sassanians, Arabic, Persian, Shirvani and Ottomans. The Shirvanshahs – a dynasty – that gave Azerbaijan its identity as well as the flowering of its culture built a palace here in the 15th century. The palace also serves as a museum which gives a pretty good idea of how life was lived during their rule.

The Old Town is a great place to shop for artefacts and souvenirs (better to buy carpets at the hard-to-miss Carpet Museum, which, er, is built to resemble a rolled-up carpet!) as well as to pause for a while and have a meal. We explore Baku in the night, especially the vibrant and youthful Fountain Square area as well as take the air at the Boulevard where old, nostalgic Azerbaijani songs emerge from speakers and period photographs of the city are on permanent display. So much more to do in Baku, but there’s more to Azerbaijan…

(to be continued in the next part)

Flame And Fortune (Welcome to part 2) 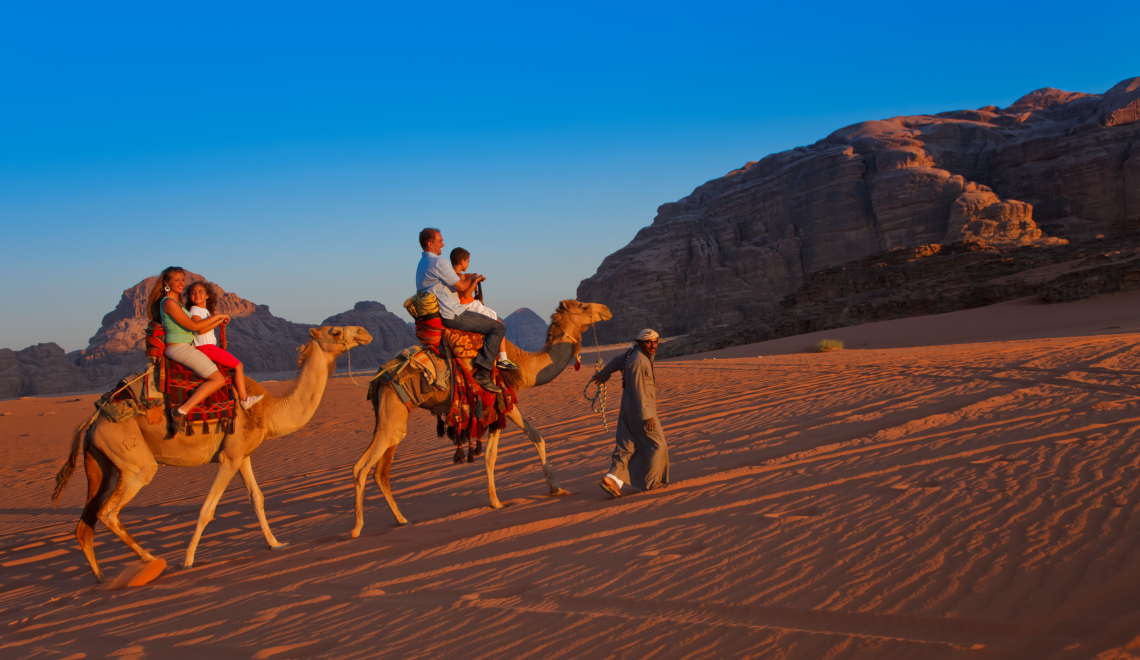 Middle East, Return as the Wanderer
The Middle Eastern Experience – Jordan and Israel