I can’t say I was sorry to leave the Konyak region of Nagaland. It was a beautiful soul stirring experience, but I couldn’t wait to get back to solid even grounds and hot water baths. (At 800m-2000m above sea level and 10C temperature, we only had running cold water at the guest house as the water heaters had all gone on the blink. Turning any one of them on would result in the tripping of the electricity to the whole building.)

The region and the area is beautiful, but the hardships that they face on a daily basis is sapping. I was expecting everyone in Nagaland to be dressed in colorful clothes and enjoy a relatively comfortable standard of living but the dirt & grime of reality in Konyak, was unsettling. It induced a strange kind of guilt, of us being able to take running hot water for granted with just the flick of a switch, while it meant chopping firewood, lighting a fire, carrying water from the well, setting it to boil and only then using it, for the Konyaks.

I had hoped that a tribal chief system in its purest form, would be a more effective form of governance. But drugs and alcohol seem to be more prevalent here than in the rest of India. A kilo of ganja / marijuana costs 250Rs (5$) while a kilo of pork or dog meat costs 130. A strip of opium soaked cotton costs 10Rs. So drugs are a cheap and easy way to dull the senses. At least for Konyak, the grain, meat and vegetables all come from Guwahati. Are these the same people who are demanding a seperate country or is that just political posturing? I left Nagaland without any answers and more questions than I entered with.

On our way out, we had to let the army post know that we were leaving and the Nagaland checkpoint too. We started early, so we could stop to take in a few sights at Sivsagar that is halfway through.

Sivsagar was the ancient capital of the Ahom kings who ruled over most of the North East for over 600 years, repelling Mughal and British attacks, but finally fell because they requiring British aid to beat back the Burmese incursions. Opinion is divided on where the Ahoms originally hailed from. The ASI says they came from China, while noted guide books claim it was Thailand or Burma. The best place to see remnants of their influence are the temples at Sivsagar. Today Sivsagar is famed as the cultural capital of Assam with all the plays & musical performances that happen here.

The Rang Ghar is the first Ahom Monument you will see while driving along the main road in Sivsagar. This is supposed to be Asia’s first amphitheater. Ahom Kings sat on the first floor of this oval structure, whose roof resembles an upturned boat and watched animal fights and cultural performances taking places in the grounds below. Today there are 2 statues placed in the gardens below to depict the kind of perfromances that took place here. 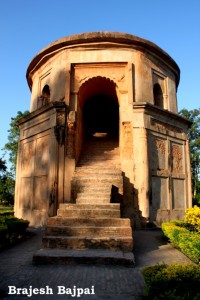 In 1734, Queen Ambika (of Ahom king Swargadeo Siba Singha) constructed the huge tank in the center of their Ahom capital and 3 temples on its banks. The Shiv temple called Sivdol is 104ft (32m) high and the circumference is 195ft (59 m) at the base. The 8ft high cupola just below the trishul on the top is covered in gold. There are claims that this is the tallest Shiva Temple in the country. 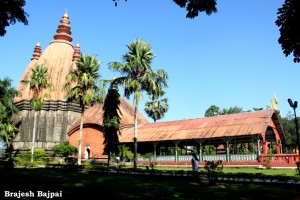 When facing the Shiva temple, the tank (Sivsagar) falls behind the temple. It is believed to be a very Holy temple and while we were visiting, we met some ladies of mixed Bengali and Assamese origin who had travelled from Guwahati to come to this tank to offer prayers for the successful and happy marriage of one of their family members. I struck up a conversation with them, because I was very fascinated by the hand painted pots in their thali. 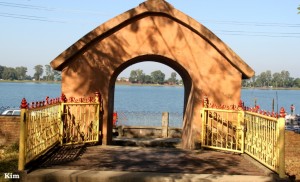 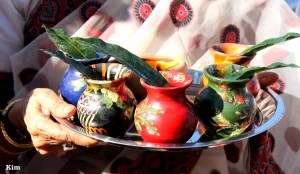 To the left of Sivdol is Devidol and to the right is Vishnudol. The compound also houses smaller temples to Kali, Hanuman, Shani & Ganesh. Plenty of pigeons and goats are fed on the premises, so if you are visiting as a tourist and want to see all the smaller temples too, I highly recommend that you don’t leave your footwear at the main stand, but take them off just outside each temple. There are plenty of temple offerrings scattered on the floor, so you are better off wearing washable footware. 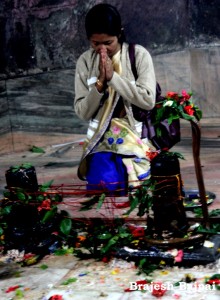 The path to the main Sivdol is lined with Sadhus and Babas peddling all manner of threads and charms. We didn’t buy anything from them, even though they were quite persuasive. With our SLR’s & Brajesh in shorts, we are often mistaken for the golden geese – “foreign” tourists, until Brajesh speaks to them in Hindi and assures them that we aren’t going to be buying cotton thread malas for 200Rs. 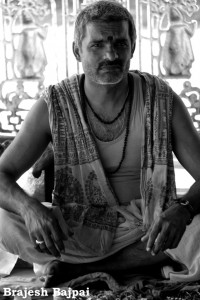 Our next stop was lunch at Sky Chef. The service is abysmally slow. But the restaurant is clean, hygenic, air conditioned with clean loos and the Chinese food was quite tasty. They served my favourite American Chopsuey on this trip so far. Yes, unfortunately, most places we have eaten at on this trip, only offer Indian and Chinese options and not their local specialities.

Post lunch, we visited Talaatal Ghar, a 2 storey Ahom palace built in the mid 18th century. The grounds are beautifully landscaped and its a beautiful walk for 5Rs. 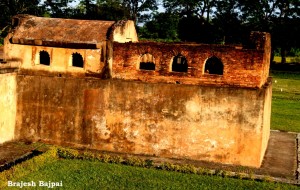 There was a special exhibition by ASI on the grounds of famous Indian monuments. We lso saw some of the before and after pictures that the ASI has taken of the restoration of all the Ahom monuments and I must say it has been a phenomenal effort. The only problem is that the buildings now look new and not a couple of centuries old.:)

Simultaneously, the ASI was also holding an essay writing competition for disadvantaged kids on the necessity to preserve historic monuments. A wonderful effort, the kids were very excited and I hope these initiatives help to make a difference. 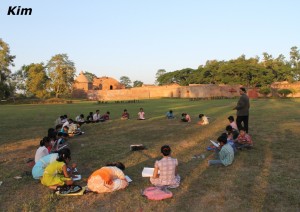 After stepping back 400 years, we were ready to come back into the present. We headed to Iora in Kaziranga to break journey before heading to Shillong in Meghalaya. It was such a pleasure to be able to have a hot water bath to wash away all the dust of the last 3 days and soothe our sore bodies. Our North East Chilli Vodka cocktail beckoned and it was with great effort that we stopped at one each, else no pictures would ever have gotten uploaded or blogs written. 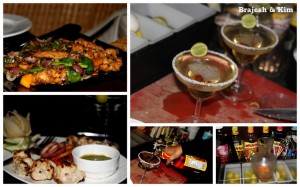