Today has been exhausting. 7 hours to drive 250kms. Of those, 3 hours were for the last 60kms inside of Nagaland. The roads are non existent. While we thought that the drive from Balipara to Nameri was bad, those were actually just a teaser. Our bodies are sore, bones are jarred, muscles are aching, nerves are shot and 4 hours after arriving, I still feel like my body is rattling around.

We set out from Kaziranga by 7:30am and given the smoothness of roads in Upper Assam, we were making good time. We drove through Sivsagar, the ancient capital of the Ahom kings who ruled the North East for over 600 years. We didn’t stop here as we needed to reach Mon in Nagaland before dark (ie 4pm), we did however glimpse the Rang Mahal from where the Ahom kings would watch elephant fights and other gladiator sport like events. It looked interesting and if we have time on our return journey, Ruporabha, our driver on this journey has promised that he will let us out to get a closer look. 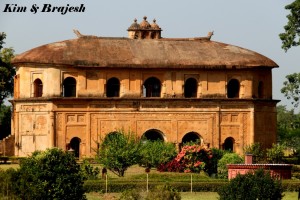 We also passed the turn off for Majuli – the worlds largest inhabited Riverine island, famous for its Vaishnavite satras. If you are planning a journey of your own, it would be worthwhile to budget 2 days to explore Sivsagar and Majuli staying overnight at a Satra.

We stopped for tea at Sky Chef in Sivsagar where the coffee and tea was average but washrooms were extremely clean. In the vegetable markets nearby, we saw plenty of Bhut Jholakia – the worlds spiciest chilli (until the new hybrid version came out of Dorset). Bhut Jholakia grown in Upper Assam and Nagaland is much spicier than that found in Guwahati. The easiest way that these chillies are consumed here are by drying them in the sun for an hour or so, then they are sliced and immersed in mustard oil. The jar is kept in the sun for a week and the pickle is then enjoyed year long. 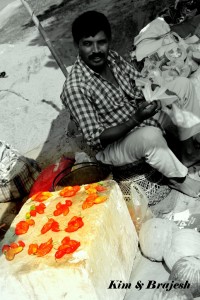 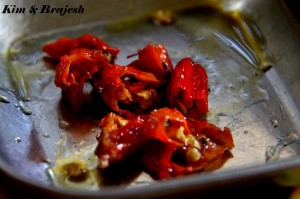 Dipankar (our guide) was very concerned that after staying at Iora and Wild Mahseer, he could not offer us similar “high standard” accomodation and restaurants on the Nagaland leg of our journey. We tried to allay his fears by letting him know that we would eat anything that was tasty (except dog meat and insects), no matter what the location looked like. He did not seem convinced and when we reached Kareng Dhabha he was very apologetic about how basic it was. We ordered 3 pork and 1 chicken thali between the 4 of us. Rice for 3 and rotis for 1. The food was simple, home cooked, but oh so tasty! As if the food wasn’t tasty enough, we also were served (our first) bhut jholakia pickle. I’d like to think that the way that we tucked in and polished off every bit that was served to us while licking our fingers, was to dispel his apprehensions and not gluttony on our part. 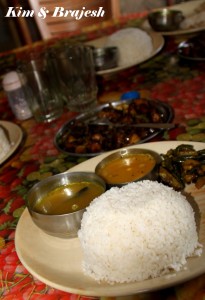 After the enjoyable lunch, Dipankar and Ruporabha confessed to us that we were the first Indian visitors that they were taking into Nagaland. Most Indian tourists they have dealt with visit Kamakhya and Kaziranga and return.

As we came close to the Nagaland border, they stopped the car to pick up some alcohol as we would shortly be entering a dry state. The alcohol wasn’t for us or for them, but for the Naga chiefs whose villages we would be visiting. At one time, most Naga chiefs were fierce, strong warriors, respected by their entire community. Today many of them are chiefs just in name, who expect gifts of opium and alcohol from visitors. 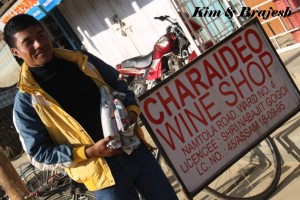 The situation has gotten so bad, that youth in many of these villages have now started harassing tourists to get a share of the booty for themselves. After checking in today, we were informed that we would not be able to visit Shangnyu village as originally planned. The harassment faced by tourists to this village, crossed all bounds today. Local youth have been demanding 2000Rs (roughly 50$) per picture taken. When the foreign tourists who visited today, felt that it was unreasonable, they decided against taking any pictures, the youth then started attacking their car and damaging it. The few tour operators who operate in this region have decided to boycott this village until the chief can guarantee that the tourists who visit will not be harassed.

The border crossing saw a flurry of paperwork. One stop on the Assam side where we had to show our ILP’s (Inner Line Permits) and other documentation to the Assamese police. The second was a permit check on the Nagaland side. If you enter without a permit you can face a 1000Rs fine or one year imprisonment or both. The third stop was at a Nagaland police station at the border and the 4th was by the Indian army. Tomorrow, we may have to personally check in with the local police station where we are staying. 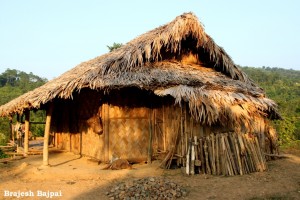 While we stopped and Ruporabha was getting the paperwork checked, there was a small vegetable market run by local women. So I stepped out of the car to take a look. We had been warned that we should be extra careful about asking permission before taking peoples pictures in Nagaland, so I did. The woman who looked like she was in charge said it would be 1000rs a picture. I did not think that this was a fair price, so I thanked her and we moved on.

The other warning that we have been given is that if anyone other than the police or army asks us, we should not mention working for any company. Company employees and tea garden employees are seen as prime targets for kidnapping. Our cover story hence is that we are writers – the most unthreatening employment, with least likelihood of being kidnapped – everyone knows that writers have no money 🙂 and it explains the cameras.

After the treacherous last 3 hours, we arrived in Mon just around sunset and saw kids running around like crazy. We were told that they were catching insects, which would soon be roasted for their evening snacks.

At Mon, we checked into Paramount Guest house. A basic accomodation. 6 rooms with attached baths and twin beds. It is owned by Aunty who used to previously manage Helsa Cottage the only tourist accomodation in Mon. Aunty is a jovial woman who is a great hit with all the guides whom she mothers. Aunty was very happy to see us, as she said that we were the first Indian tourists to stay with her over her 20+ years managing Helsa Cottage and Paramount Guest House. She told us dinner would be served at 7:30pm. There is no menu. Food is whatever she cooks in her home for the visitors. Today it was rice, dhal, mixed vegetable and pork with custard for dessert. The pork was first boiled, then marinated with ginger garlic paste and then fried in an egg and cornflour batter. An interesting combination of simple flavours.

We are very excited about tomorrows village visits and the possibility of 7 hours of sleep. We have both taken a dispirin to soothe our aching bodies and hopefully we will wake up refreshed and charged to face those roads again