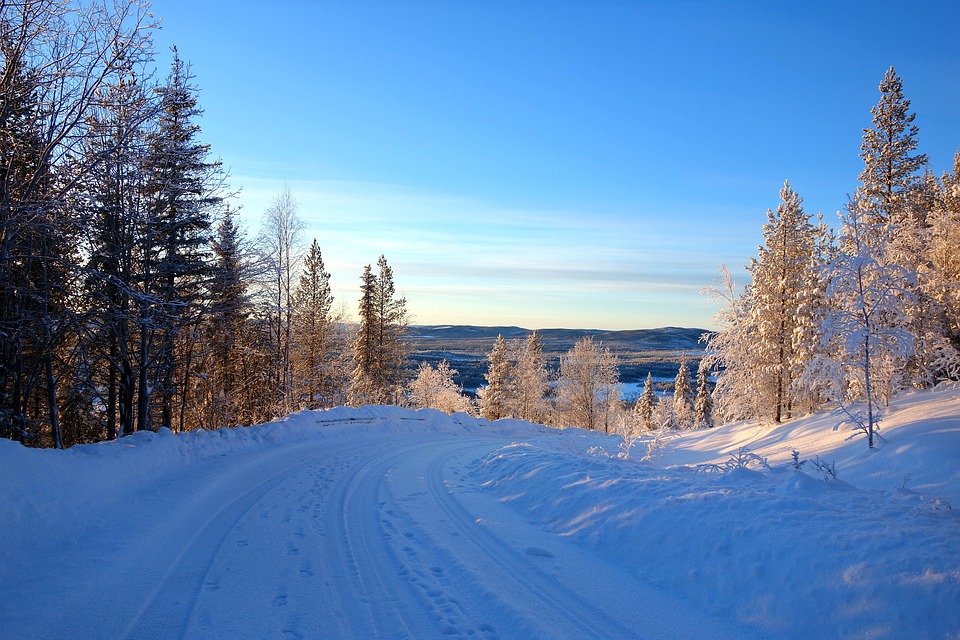 It’s snowing, huddled in the cosy little room in the Arctic Finland (Lapland), I know the temperature is roughing out between a minus 6 to minus 18. And that is really cold. The daylight is for approx 4 hrs only from 1030am to 2.30pm (sunrise and sunset resp). But then, surprisingly, this is the time when this region, called Lapland comes alive.

A land which holds a Narnia like appeal…a land, if you look at the map is loosely the Northern tip of Europe covering northern parts of Norway, Sweden, Finland, Russia most of which is within the Arctic Circle. I spent a couple of days last week in Finnish Lapland in the small town of Saariselka, considered to be one of the Northernmost resort towns in the world.

A land where the white winter calls out like a siren to me.

Day 1: The Finnair flight from Del-Helsinki connected to another flight to Ivalo, 250kms inside the Artic Circle. A short 25min drive brought us south to Saariselka where we spent 2nights. Cold, dark and snowing, the mercury had plummeted to minus 15 deg C. We were escorted to our glass igloos in the resort village of Kakslautannen, a small resort with log cabins as well as igloos (both ice as well as the more comfortable heated glass igloos). The glass igloo had a small attached toilet (no shower) and twin beds. Small but cozy and definitely had a warm appeal to it. What took our breath away was the glass dome, a way to ensure that in case anyone sees the Northern Lights, all you need to do is peep out of your blanket and voila!  But unfortunately, the Aurora Borealis proved elusive that night.

After unpacking, we trudged to the other side of the frozen lake (on which Kakslautannen is located), to the communal sauna. Walking on the wild side, we decided to go by the old adage, “When in Rome…do like the Romans” In this case, we followed the local Finnish custom, we went into the sauna, got suitably warmed up, then ran in the buff to take a snow roll and run back inside. After another 10 mins inside the sauna, we ran another 20mtrs to the lake, where they had carved a hole in the ice, took the ladder down to the icy waters of the lake for a dip, came out, searched for a white towel in the white landscape in a disoriented state, abandoned the search and ran back to the sauna..the towels would follow later, some day.

Boy, were we glad that Day 1 ended at all.

Day 2: In the morning, we packed our bags and walked through snow (roller suitcases/strolleys aren’t meant to be dragged through foot deep snow) to the main lodge for breakfast. Post that we drove over to a husky farm where we were first outfitted with a thick overall and snow boots and then met up with the cutest bunch of snarling huskies for a 30min ride through a frozen forest. I will not use the word frozen again. Whenever in doubt about the state of mind or body or the surroundings, rest assured it was always frozen.

And if we thought that the glass dome and the dip in the icy water was the highlight, Day 2’s husky ride was an experience, which probably, I wouldn’t be doing justice with mere words. A MUST EXPERIENCE!

By now we were hungry, so off we trudged into Holiday Club Saariselka in the heart of town – ideal for families who want to be in the middle of a small town. The resort claims to be the Northernmost spa hotel in the whole world. Its USP is the large indoor heated swimming pool complex. At plus 32C, it’s a fantastic break from the minus 15C outside.

Post lunch we returned to Kakslautannen Resort to our 2 bedroom log cabin. Equipped with a kitchenette, common bath in the living room, a children’s room with 2 bunk beds, a fireplace and the master bedroom with a private sauna;) this is ideal for a couple with 2 children. After another mandatory sauna, we left for another spectacular trip. Northern Lights hunting on snow mobiles. These 800cc bikes are easy to use and fun to ride. Once again we were outfitted with a warm outer dungaree, balaclavas and snow boots. A rudimentary lesson on snowmobiles followed. But we had all seen Mr. Bond plowing his snowmobiles all over the world in countless movies to know how to ride one. And so off we went. The 10 snowmobiles zooming off into the winter landscape in single file with headlights on. By now the snow was soft but fell relentlessly on us. We followed a forest trail sheathed in white, the trees laden with pure white snow and drooping onto our trail. Soon, we left the city lights behind us. The soft glow of white light of the Arctic sky brought out the eerie beauty of the place. We zigzagged through narrow forest trails, over a frozen river bed, revved up small mounds and zipped down the inclines. Pure adrenaline rush. After a while, we halted. The guide asked us to turn off the engines and soak in the Arctic night. Nothing prepared me for this. The stillness of the landscape punctuated by the silence of falling snow. We were on a mound with the fell below us. The soft, white light of the Polar night illuminated and embellished the landscape. There would be no sighting of the Aurora tonight. The snow was heavy. But, it didn’t really matter. We started on our journey again. A few minutes later, we reached the end of a trail. The guide asked us to switch off the snowmobiles and follow him down an incline towards a frozen stream. A small tent awaited us there. We sat around in a semi circle on reindeer skin rugs, while the guides went about their business of preparing a small fire, putting the kettle on it for some hot tea and coffee and grilled up some excellent sausages! 30mins later, we were off again, this time bound for the city lights, which would appear soon enough. But till them we would continue with the ride of our lives. 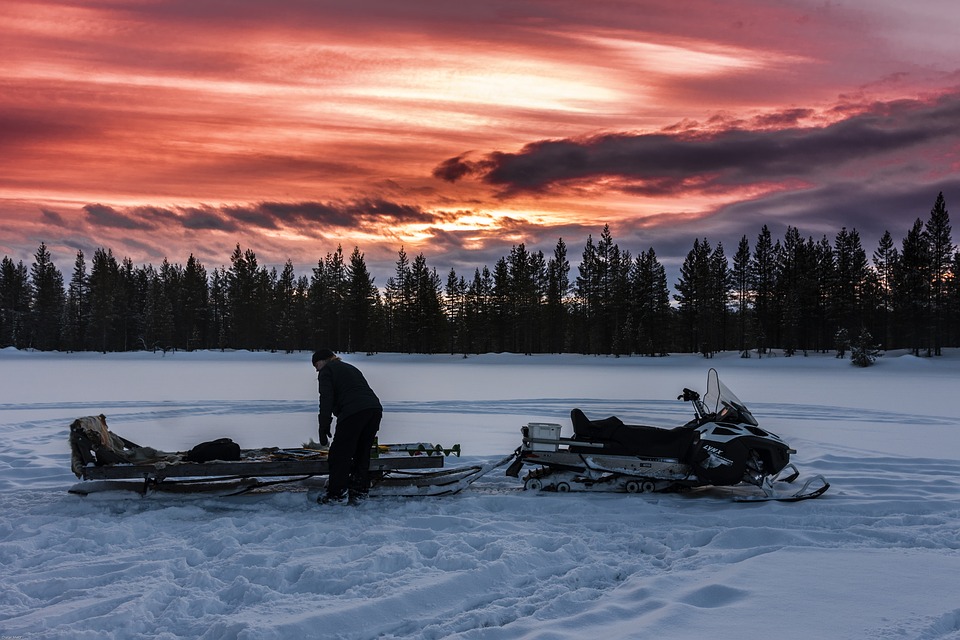 Day 3: We boarded the 9am coach from the highway bus stop. This is a daily Saariselka to Rovaniemi coach and costs Euro 42.60 per person for the journey. A very scenic drive of 3-1/2hrs with a 20min halt in a small town for a rest break. The bus eased into Rovaniemi bus station at 1230pm, from where we were picked up by our taxi. There is no train or flight between Saariselka and Rovaniemi. The road journey is excellent. In summer, the snow would disappear giving way to nature to show its true colours. After checking in at Santa Claus hotel in the town centre, we took a cab to the Arktikum (the museum), followed by a drive around town and were later dropped off to the Santa Claus Village. A fairy tale village which comes alive in winter!

And guess who was in none other than Mr. Santa Claus – who I had the honor of meeting and just when I thought that I had seen and done it all, I had Mr. Claus tell me that he had heard good things about me! Photography is not permitted as they take their own snaps and video for you to buy. Santa Claus also has a house in Saariselka and there you can meet him in private without the rush of Rovaniemi and can take your own snaps. Needless to say, kids will love the place as will adults. Next up was the Post Office which handles hundreds of thousands of letters every year with December being the month when Santa is flooded with mails from all over the world. There are 2 boxes. If you post your letter in the red one, it gets posted immediately. If you drop it in the orange one, it will be posted during Christmas. We returned to our hotel and later were driven 10kms out of town to a reindeer farm. Here we put on the warm overalls, and went for a short, sweet ride in a reindeer sleigh. Not thrilling like the husky dog sled, but quite an interesting one. We returned to our hotel, went to the sauna for a mandatory run in and later at midnight, went to a local Karaoke bar which was packed to capacity on a Wednesday evening and stayed on till 2pm listening to drunk, middle aged Finns singing out-of-tune Finnish songs.

Day 4: Drove to Rovaniemi airport (10mins away). Flew back to Helsinki where it was a warm minus 8! The Baltic Sea was frozen as was the quaint city.

Sitting down to pen my words, I go back to every second of my stay – every experience which, I equate to being a book in my Travel Diary. The magic, the mysticism, Santa Claus, the huskies, the Northern Lights…Wandering has never seemed better! Packing my bags, but already working out my schedule to head back yet again into the white magical land of Lapland.

Check out our new package on Finland