Be the Wanderer Day 2

After a wonderful dinner and restful nights sleep (inspite of the raging thunderstorm outside) at Wild Mahseer, we headed out to the Nameri National Park early in the morning.

Nameri is the third largest sanctuary in Assam after Manas and Kaziranga, but it is actually part of the same reserved forest area that is called Pakhui Game Sanctuary in Arunachal Pradesh, making it the largest in North East India. Nameri only has foot safaris and it is also the only sanctuary in India where you can do a foot safari.

To explore Nameri, you need a permit, which can be got from the eco-camp (also a lovely place to stay) a few kms before the river crossing. Once we procured our permit, we drove to the banks of the Bharali river and took a short boatride across in a canoe. 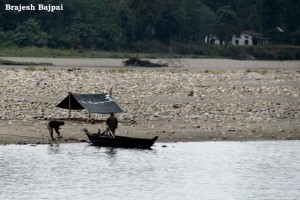 We were accompanied by 2 armed guards who also serve as spotters and guides within the reserve. 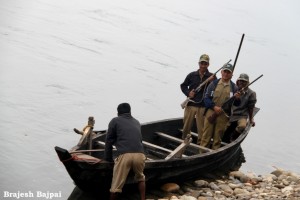 To our bad luck, although this is supposed to be the dry season, it had rained really hard for the last 2 days and the ground was all mucky and swampy. In many places, we could only walk across by balancing on thin, unsteady logs. Unfortunately, after walking for a couple of hours, although we did hear some peacocks and barking deer in the distance, we did not get to see any wildlife. The leeches in the forest were much luckier though, they got fresh blood to suck on and we ended our trek with freshly crushed herbal poultices on our feet when the blood wouldn’t stop flowing. 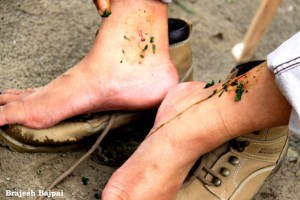 My recommendation for anyone wanting to visit Nameri, is not to go if it has rained the previous night. The going is really tough and the chances of spotting wildlife are drastically reduced. We did see a “mithun” at the forest officers outpost though – a domesticated gaur. 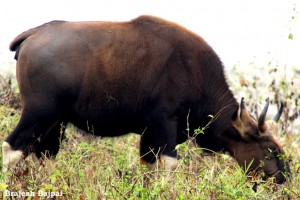 It was disappointing to have woken up early, endured a bone rattling car ride, braved trekking across murky swampy trails and then not see any wildlife, but that is a risk you always take when it comes to dealing with the wild. Sightings are completely unpredictable.

We dropped our armed escort back at the permit point at the eco camp and drove back to Wild Mahseer, where the staff instantly lifted our flagging spirits with an excellent spread of Anglo Indian food. Chicken soup, chicken stew, a mix vegetable stir fry, pea chops, Macaroni cheese bake with hot buttered buns and a bitter lemon souffle for dessert. 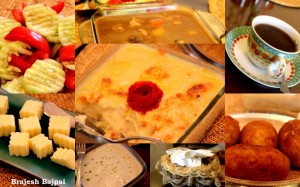 After lunch, we loaded the car and headed towards Kaziranga. The drive passed by lush tea plantations until we came to a point on the road where we had manicured tea plantations sprawling on our right and the wilderness of Kaziranga national park on our left. 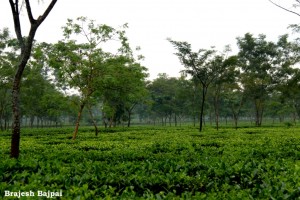 It took us about 2.5 hours to drive from Balipara to Kaziranga. Initially the raods were really bad and almost non existent. Then suddenly when we arrived at Upper Assam the roads improved dramatically, almost as good as the Mumbai – Pune or Delhi-Chandigarh highways. While the roads we traversed in Lower Assam were frankly quite terrible, they would have been non-existenet if not for the work of the Indian army which helps in protecting these roads which often traverse through patches of bodoland. Ever since we visited Leh, we have been unlimited respect for the majority of the Indian army that lives and works in such inhospitable terrain for pittances, just for the love of their country. It is because of them, that we can sleep peacefully at night. 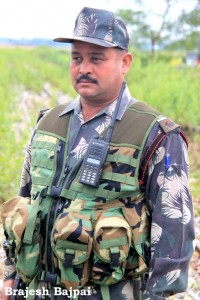 At Kaziranga, we are staying at the Iora, which is a few minutes drive to the central range. We did see some hog deer while driving here, so we are hoping that it is a good sign of things to come tomorrow when we head out for our Elephant and jeep safaris.