Antarctica: A journey to the worlds end Day 1 – Day 4

” A journey is a person in itself; no two are alike. And all plans, safeguards, policing, and coercion are fruitless. We find that after years of struggle that we do not take a trip, a trip takes us.”  – John Steinbeck

Departure was scheduled at 6:00PM, the ropes were lifted from the quayside, and our expedition ship moved off and headed out into the Beagle Channel to begin the long expected journey to Antarctica. 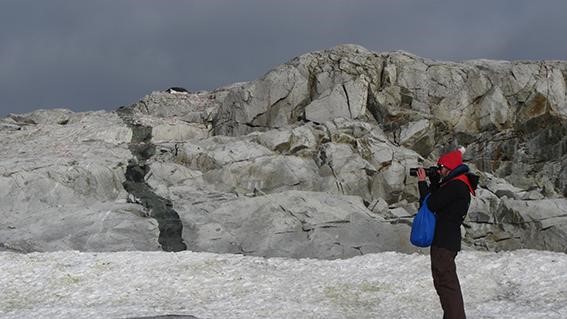 Once onboard, we settled into our cabins, and then gathered in the bar for a Welcome Cocktail. This gave us all a first chance to interact with our fellow passengers and to know the Expedition Staff, as well as some members of the crew. Before inviting us for a welcoming toast, our Expedition Leader also presented our biologist and Assistant Expedition Leader, the naturalist, the guide, and the geographer. They would help us understand the wonders we were about to explore and give lectures during the trip. Expedition Leader also introduced the doctor on board, and our hotel manager, who would be in charge of our well-being with a little help from his kitchen, dining room and cabin staff.

In the meantime, the Expedition Ship was starting to leave the pier in Ushuaia. We were sailing through the scenic Beagle Channel, heading for the open South Atlantic Ocean. After a short while, Our Expedition Leader called us again for an important briefing on safety on board and the abandon ship drill. Shortly after, the ship´s alarm gave us the signal to execute this emergency drill. Moving to our cabins, we donned ourselves with the warmest clothes we could find, picked up our life jackets, and then headed to the muster station, which was at the back of the bar. After a roll call, we knew that everybody was acknowledged for and were led to the orange egg-shaped lifeboats. We felt quite safe but at the same time, we were hoping never have to use them at all.

A nice dinner awaited us shortly after the lifeboat drill giving a chance for everybody to get a bit more acquainted. The evening allowed some of us to be on the decks to enjoy the great scenery of the Beagle Channel, where some of the first birds were spotted. Later, after dinner, we were offered to watch the documentary “Trapped in the end of the World”, about Nordensjolk epic adventure, and we went to bed.

Once we left Tierra del Fuego behind the night before, we were in open waters heading South on our way to Antarctica. It was a little windy, the swell was of up to 5m and the ship moved a bit. Bird watching on the outer decks was fairly good, leading afterwards our way into the bar, where the Assistant Expedition Leader was waiting for us to share his knowledge about ‘Penguins’

After a lunch that not everyone attended, early in the afternoon at the bar, Pablo showed us how different nations could put differences away, and create the ‘Antarctic treaty’. Short after tea time,  The Expedition Leader was in charge of making a general approach to several Antarctic outstanding facts through his lecture “Antarctica, Land of records”. We slowly started to perceive the adventure that we were about to live.

Our movie time after a Drake proven dinner was the documentary Frozen Planet. Many of us went to bed quite early, and no one stayed up late.

Antarctica is getting closer …

A little ship rolling, and a gray, windy sky strayed most of us to the bar or our cabins. Weather inspired us to attend Juan’s lecture, about Antarctic geology. And briefly afterwards the Expedition Leader gave us a mandatory IAATO talk about the required behaviour and equipment for a successful landing to Antarctica. Then we were also introduced to safe “Zodiac” operations, concerning the use of the pneumatic boats for landings and short scenic navigations. A quick introduction on how to dress for the outdoor activities was given too. So, we only needed to check our cameras, load batteries and, generally speaking, be ready for the big adventure, which awaited us.

Soon, in the afternoon, the South Shetland Islands were sighted and we entered them between Greenwich and Livingstone islands through Mac Farlane Strait. Once in the channel, we landed at Half Moon Island where Camara station (Argentina) is located. Finally stepping on Antarctic soil! In the area we could finally stretch our legs in a cold late afternoon, surrounded by Gentoo penguins with their grown chicks and a number of fur seals, and some skuas. After we had enjoyed this landing the boats were ready to return us onboard the Expedition Ship.

In the calmer waters of the South Shetlands we had dinner, a short briefing with the activities for the coming day, and finally went to rest thinking about our first sight of Antarctic penguins.

Starting our day with a cloudy and cold morning, it got just better and better. After having breakfast sooner than yesterday, we prepared for our next landing, at Trinity Island in the Mikkelsen Harbour. Between diving penguins, we landed in an impressive historical remaining of the whale hunt industry were shown and wore off as soon as we step on the beach. Ribs of boats and ribs of whales, a strange metaphor for a forgotten way of living. Some Gentoo penguins and a couple of Southern Fur Seals invited us to walk the Island, as the staff members proposed a secure trail. From seemingly nowhere, an Argentine refuge hut, which was being restored, but we didn´t get the chance to go into it. A very interesting and intriguing landscape, indeed. We boarded the Expedition Ship anxious for the hot meal that was waiting for us. We sailed a little further, to the Cierva Cove, near the Argentine base “Primavera”, which means, in Spanish, “Spring”. We took two turns to sail on the Zodiacs, for more than one hour each. Nothing prepared us for what we were going to experience. At the very beginning, we could just be wondered over the fishing activities of a couple of Humpback Whales groups. These whales have two different hunting behaviours over krill or fishes. They can just widen up the mouth and engulf lots of krill, pushing afterwards the water through their baleens using their tong. Or they can “Bubble Net”: expelling air bubbles in a kind of circular net.

This air rises to the surface and increasing its volume, the victims get trapped in those and latter eaten the same way than before, engulfing and filtering. They even showed us their tails, laterals fins, blows, and even a little cub was showing off. As we continued our sailing, we could take a real close look at a leopard seal that was resting on an iceberg, just like in a couch. They are not usually aggressive, and she let us take many pictures. Hey predate over fishes and, in some occasions, over penguin’s chick, unexperinced in this cold and dangerous waters. The same kind of sighting for several crabeaters seals we encountered some icebergs further. They get their name from what they eat, not crabs, but krill, which is also a crustacean. A group of gentoo penguins were rehearsing the sea diving skills, near the entrance to the base. The big BIG surprise was just after the second group arrived to the ship. Some humpback whales got curious, very curious, and approached the ship´s stern… We were left wordless, feeling like blessed for the presence of this majestic animals, like ambassadors from another world. Some of us got lucky enough to watch the visit on their zodiacs, and the rest of us contemplated from the stern. A while after, everybody onboard, the guide prepared a recap, just a little info about Antarctic bases and just right after the briefing we had dinner. Today´s bar special: Martini Night!